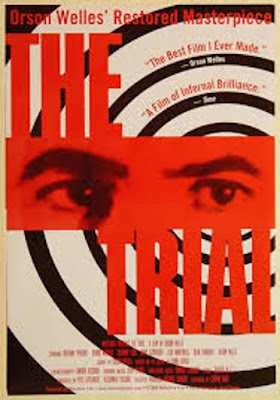 Discussions on Orson Welles’ greatest works usually always center on his universally canonized, viz. Citizen Kane, Touch of Evil, Chimes at Midnight, and to a slightly lesser extent, The Magnificent Ambersons. It’s a shame, therefore, that his extraordinarily brilliant but strangely underrated masterpiece The Trial is rarely accorded similar shelf space. The novel by Kafka – one of the seminal literary works of the 20th century – had portrayed relentless bureaucratic machinery which, like the tentacles of an infinite octopus, gradually sucks a person into its vortex. Welles, in his virtuoso and spellbinding adaptation – he made alterations to the text, including freely rearranging the narrative and mordernizing certain aspects, and filmed in cities across Europe, though ironically not in Prague – dazzlingly captured the nightmarish, surrealistic, and, well, Kafkaesque world of the book! The resultant work, therefore, was as delicious a black comedy as it was a mesmerizing audiovidual tour de force. The story, at its most elemental, is about Joseph K (Anthony Perkins), a young, arrogant, mid-level bureaucrat, who wakes up one morning to realize that he’s under arrest; while his scenario becomes increasingly more precarious with each passing day, he never gets to know what crime he’s charged with. Perkins was excellent, as was the support cast comprising of Jeanne Moreau as a seductress K is attracted to, Romy Schneider as a coquettish maid, and Welles as a rotund and domineering advocate. The film’s most striking aspect, however, were its hypnotic production designs that evoked oppression, alienation, absurdism and bleak nihilism through enthralling expressionist visuals filled with feverish chiaroscuro and canted camera angles; labyrinthine set designs and disorienting locales; and a score that alternated between high-tempo jazz and fatalistic mournful.