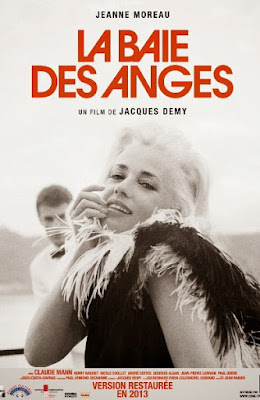 Demy’s marvelous second feature Bay of Angels was an engrossing concoction of blasts of ecstasy and lingering fatalism, the kind that one may associate with tremendous, unshakeable and self-destructive frenzy of addiction; gambling, no wonder, can be as viscerally intoxicating as drugs, religion and nationalism, and that formed the central thread for this bleakly beautiful film. Understandably, the two people that this hypnotic thread connects are lost souls – one who’s slowly getting lost and the other who’s irretrievably lost beyond hope; the seemingly doomed romance that brews between them, connected by their shared addiction to high-stakes roulette, imbued the movie with a melancholic tone and flavour that elevated it beyond any didactic social commentary. Jean (Claude Mann) is a young salaried employee who has his first taste of blood, so to speak, when he ends up winning a lot of money upon being coaxed by a colleague (Paul Guers) to visit a casino in Paris. With a new sense of liberation and defiance, he decides on a whim to go on a solo week-long vacation to Nice. There he meets, gets entranced by and ultimately falls in love with the impetuous and alluring Jackie (Jeanne Moreau), a much older divorced woman who lives her life on the edge on account of her impossible passion for and enslavement to gambling. Moreau, with her shocking platinum blond hair, fierce sense of freedom and self-destructive abandon – a beguiling mix of femme fatale and tragic heroine – was absolutely irresistible. And their turbulent days together – from the French Riviera to Monte Carlo and back – was memorably accompanied by moody B/W photography and glorious jazz-based score that alternated between moody trumpets and euphoric piano chords.