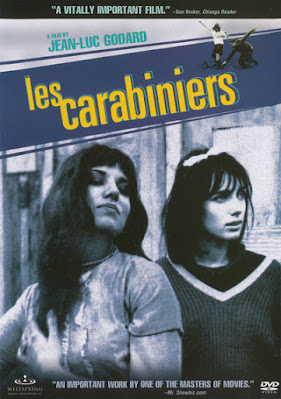 Les Carabiniers’ spare, linear narrative was stunningly atypical of Godard, what with it’s having not just a beginning, a middle and an end, but also – ironically – in that order too. And his scathing anti-war satire – with sharp jabs also aimed at rampant commoditization in a capitalist, consumerist social structure – was also among his most brazen, acrid, anarchic and satiric; its droll mix of dreary realism and darkly funny absurdism, in fact, felt closer to the Czech New Wave. And these aspects made this such a radical departure in Godard’s filmography; no wonder, it was received with hostility upon release, and perhaps remains the least watched among his 15 Nouvelle Vague features. In the deadpan first act, two poor, gullible dolts – cigar-smoking Ulysses (Marino Mase) and leery Michelangelo (Albert Juross), married to glibly saucy and fashion-obsessed wives (Catherine Ribeiro and Geneviève Galéa) – are fooled by a couple of soldiers into going off to war, by telling them that the king himself has asked of this favour, and promising them of free-for-all riches – from permission to steal cars and slot-machines to committing pillage, rape and massacre. The discomfiting middle act portrayed the two dim-wits having a grand time amidst the devastating war raging across Europe; interestingly, their letters back home, chronicling the banality of violence, murders and mayhem, were composed of actual war-time correspondences; and, in a wry, self-reflexive moment, we see a hilariously failed attempt to break into the cinematic realm while watching a movie à la Keaton. And, in the farcical final act, they present their prized stash of war loots to their wives, viz. postcards on everything from Rin Tin Tin and the Pyramids to Cleopatra and Bardot.