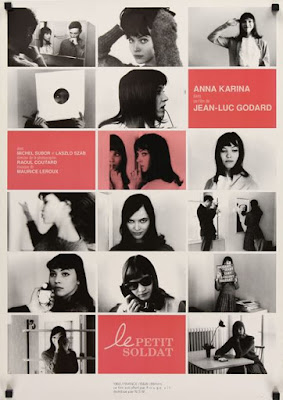 Godard famously quipped, “Photography is truth. And cinema is truth 24 times a second” in his magnificent, albeit underrated, gem Le Petit Soldat; he’d made it immediately upon the release of his groundbreaking debut Breathless but was banned for its unsavoury portrayal of French forces in its dirty conflict with the Algerian Liberation Front – it saw the light of day only after the Algerian independence – which subversively underscored the murky, relative and inherently subjective nature of truth. Like its seminal predecessor, this too was stunningly shot in sparkling B/W by Raoul Coutard, made with improvisational formal exuberance, laced with an absorbing sense of existential ennui and fatalism, and had a brewing relationship between an anti-hero and an alluring, enigmatic and ambivalent woman; however, they were also very different films. Brooding, filled with poetic realism, and subliminally ambiguous in its political stance, this was in equal measures radical, provocative, insolent, somber and jaunty. Set in a moodily photographed Geneva at the height of the Algerian War, Bruno (Michel Subor) is enlisted by the French Intelligence to carry out nefarious missions against pro-FLN intellectuals and activists, and in turn they help him avoid deportation to France where he’s wanted for desertion. He, however, develops cold feet when asked to murder an FLN leader, further complicated by his falling for the carefree Véronica (Anna Karina, in her first of 7 legendary feature collaborations with Godard), who sympathizes with the Algerian cause. The film comprised of a discomfiting torture sequence carried out by the guerillas – no wonder it didn’t just outrage nationalists, but also some on the left – and that made this all the more complex and compelling, its freewheeling technical ingenuity aside.