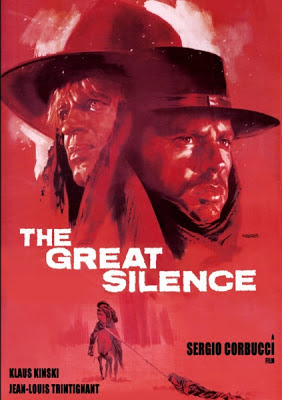 Sergio Corbucci’s The Great Silence might not be as iconic or popular as his Django, but it is considered by many, including Spaghetti Western aficionados, as his best work. This harsh, bleak and disturbing film with strong socio-political undercurrents remains a rarity for having brought two of the most legendary European actors together – Jean-Luis Trintignant and Klaus Kinski. Silence (Tringtignant) is a mute gunslinger incredibly adroit with his custom-built weapon, while Lolo (Kinski) is a sadistic bounty hunter who kills men with rewards on their heads. The two are put on a scintillating collision course when Silence falls in love with Pauline (Vonetta Mc Gee), a beautiful widow, and decides to avenge for her grief by killing Lolo. Corbucci sure loved having his heroes being put into physical disadvantage before the climax, but the much anticipated showdown never fully materializes; rather, it ended on such an anti-climactic and pessimistic note that he had to release another version with a happier finale. Though tad uneven in terms of direction, script and acting of the support cast, the themes of class struggle and racism, and the moody atmosphere, added depth to the it. The two renowned lead actors were eminently good; Kinski, in fact, was particularly memorably for his gleefully immoral turn. Set amidst the Great Blizzard of 1899, the stunning and foreboding white landscapes added a menacing tone to the film’s character. And Ennio Morricone added another feather to his vaunted cap with the rapturous score that superbly alternated between edginess and melancholia, and used everything from violins to trumpets to even sitars for the rousing sound effects.

Corbucci’s reputed masterpiece, 1968′s THE GREAT SILENCE complete with an intoxicating setting in the snow and some sadism and nihilism, is mostly unforgettable and a spaghetti western par excellence. Klaus Kinski and Jean-Louis Trintignant as you note give powerful, chilling performances. There is an intoxicating aspect to the snowy environs, and the film is an atmospheric masterpiece. I had the great fortune of seeing this at the Film Forum's spaghetti western festival, and it was absolutely one of the best film's of the entire event, and one I voted in a high position on my own western ballot. Terrific review Shubhajit!

Thanks a lot Sam. Yes, I did note that it featured high in your list of Best Westerns. Though Corbucci was not Leone, he sure could make physically & psychologically gripping Spaghetti. The fact that Trintignant & Kinski share the same frame, in itself, ought to be reason enough to watch this film. And that bleakest of bleak climax - that was unexpected! I can understand what a great time you must have had while seeing this in the festival.

I prefer Django (1966), but I liked The Great Silence quite a bit, has some nice details, and agree about Kinski, a menacing performance by him.

Looking over your recent posts, you've been watching a lot of westerns!
Are you on letterboxd? If so, you might want to contribute your top 10 westerns for the July challenge:

Yes, I'd been on a Western spree for a month or so. I still intend to watch at least 2 or 3 more before I take a break from this genre. I was on this spree in order to fill the gaps before participating in the proposed Western Countdown to be held at Wonders in the Dark over the next few months.

As for the 2 Corbucci films, I too would rate Django as the more entertaining film while The Great Silence as the better work.

Thanks Chris for sharing your views on this.