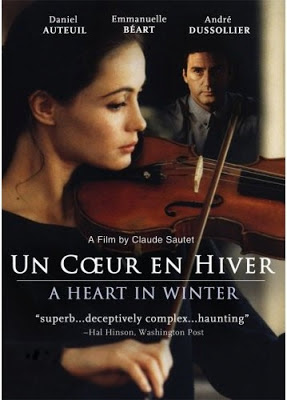 Love stories get made dime a dozen in the world of cinema, but only one in a million manage to be as nuanced, delicate, layered, affecting, matured, intimate and profound as Claude Sautet’s incredible penultimate film, A Heart in Winter. It managed to be a passionate yet melancholic look into a realistic and beautifully etched love triangle without every crossing the line, so to speak, on either side. Stephane (Daniel Auteuil) is a genius at making and repairing violins, and Maxime (Andre Dussolier) is his senior partner of their exclusive shop targeted towards connoisseurs and artists. Though long time partners and friends, the two men couldn’t be more different – Maxime, who is warm, suave and gregarious, takes care of the business, while Stephane is enigmatic, distant and introverted, and spends all his days and nights ensconced by his craft. Their quiet sense of balance and status quo, however, get shattered when Maxime informs Stephane that he has decided to leave his wife and introduces him to his new fiancée – the ethereally beautiful and virtuoso violin player Camille (Emmanuelle Beart). Thus begins a fascinating and volatile ménage à trois as the fragile Camielle starts forging a complex and emotionally charged relationship with Stephane; with Maxime gradually becoming aware of the shifting dynamics, the lives of the three marvelously drawn individuals slowly but surely cross the point of no return, thus leading the film to an understated but memorable finale. Stellar performances abounded from the three lead actors. Leisurely pacing, somber visuals and excellent musical motifs perfectly accentuated this gut-wrenching drama on love, friendship and heartbreaks.

Auteuil gives a shattering performance and Beart's stoic embrace makes for an utterly fascinating study of the intricate failings of a relationship. The film weaves an emotional spell and certainly there is heartache and shifting dynamics in the menage e trois. It's a masterpiece and Sautet's most profound and affecting work. You have hit another bulls-eye here Shubhajit!

Thanks a lot Sam. Yeah, the performances of all the 3 lead actors were brilliant. And that, along with their characterizations in the script, made each of them such wonderfully rendered characters. In fact, Beart apparently learnt violin for a year in order to prepare for her role. In the end, its got to be one of the most matured & nuanced romantic films ever made.

Not a film I'm familiar with at all, except for the title; interesting to see it leap into the midst of your top 100! Out of curiosity, what title got bumped? Or is it now a 101? ;)

In fact another film of Claude Sautet is now in my Top 100 - Vincent, Francois, Paul & the Others, which I consider as Sautet's best work (among the 6 films by the French director that I've seen so far).

Its still a Top 100 - if 101 movies are listed, that's an inadvertent error that needs to be corrected by me. And I really don't remember which movie got bumped off as a result of this addition. What I do remember is that it was a very good film that I had to narrow down on not through selection by through a process of elimination - I remember this because every time I wish to add a film to the list, the resultant "bumping off" always puts me in severe & excruciating dilemma :)