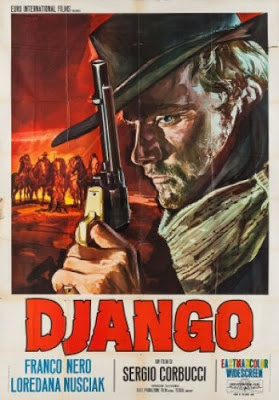 When it came to Spaghetti Westerns, the only filmmaker whose reputation came remotely close to Sergio Leone’s was the man referred to as “the other Sergio”, viz. Sergio Corbucci. And Django, a cult classic of the sub-genre that spawned over 30 sequels and lent its protagonist’s name along with its brilliant theme song to Tarantino’s Django Unchained, quite easily remains his most iconic work. Tarantino, in fact, paid homage to it long back with the infamous ear-slashing scene in Reservoir Dogs. Flamboyant, gleefully violent, unabashedly stylish and highly entertaining, it was his reinterpretation of Kurosawa’s Yojimbo, even though Leone had beat him to it with his A Fistful of Dollars. The titular protagonist (Franco Nero), a laconic and enigmatic drifter, loner and crack-shot, silently glides into a dirty one-horse town in the Mexican border pulling a heavy wooden coffin. He lands right into the middle of a bloody territorial war between Mexican bandits and White Supremacists – the latter led by the sadistic Major Jackson (Eduardo Fajardo). Despite the elaborate plot that ensues, as it turns out, Django is in town to take a very personal revenge against Jackson, and the coffin he tows along hides a machine gun that he uses against both the sides to operatic effects. Nero, with his blue eyes, impassive demeanor and natural swagger, did manage to embody the film’s moral ambivalence with ease, even if he never really had to act much. Gloriously shot by a restless camera and aptly scored, it was dark, brutal and almost cartoonish in its depiction of one man against an army, and was memorably aided by the superb title track.

By the words "The Other Leoni", you reveal that you know the story how franco nero was made to act in this film, right?

Apparently the producer wanted Nero & it was Corbucci's wife who convinced him to finally select Nero for the role even though he wanted someone else, if I'm not wrong. The film's production, in general, was quite tumultuous from what I'm aware. The tantrums that Corbucci threw on the sets reminded me of Warner Herzog.

What i meant was different.

This is a story that i read somewhere (Forgive for my memory, which isn't helping where i did).

Apparently Nero's agent came up with this proposal of a Western directed by Some director named Leone.

So he accepted (assuming that it will be the LEONE who did the Dollar films).

Later on, a scribe asked him what made him to accept this role for such a director?

The answer that Nero gave is so popular that it comes invariably in every alternative dinner table discussions: He said, He thought that the director was THE OTHER LEONE

Thanks for the anecdote, I wasn't aware of that. In fact, so far I'd thought that he's called 'the other Leone' just because the 2 shared that same name and that he was a distant second to Leone in terms of respect. Didn't know there's a back-story to his moniker :)

I was thinking about giving Django a watch this year because of Tarantino, but somehow forgot. Thanks for reminding me. Plus you're right, that theme tune is amazing.

I too had been planning to watch it for sometime now. Finally took the plunge and I'm glad that I did.

This is another western classic, and one of the most emblematic and venerated in the sub-genre known as the spaghetti western. I had the great fortune of seeing it last year during the Film Forum's spaghetti western festival, and it was one of my absolute favorites in that venue. As you note in this commanding review it has exerted incredible influence, and the set piece of Nero dragging the coffin remains one of the most unforgettable images in the form. It's violent as hell, but it's also irresistible.

Yes Sam, indeed. Its violent, racist, brutal, operatic, overtly stylish, even tad derivative if you will, and all; yet it still remains an iconic work. Despite the grimy setting it had such splendid cinematography. And the title song - well, what I can I say that hasn't been said already! Even though I was aware of what was inside his coffin, it still managed to excite me when finally opens it to spectacular effects. I can understand what a great experience it was for you to watch (or rather revisit) at the Spaghetti Western festival.