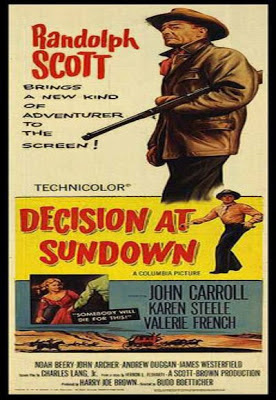 Decision at Sundown, the third of seven collaborations between Budd Boetticher and Randolph Scott, was a strange little Western. It didn’t just have its rationally blinded anti-hero seeking revenge for a rather senseless cause, and its antagonist, though he’s anything but a bad guy per se, visibly worried when the inevitable face-off occurs, it also had possibly the most comically unspectacular showdown in the history of this otherwise “macho” genre. The film begins with Bart Allison (Scott), a gruff Texan riding into the prosperous town of Sundown with his amiable buddy Sam (Noah Berry Jr.) with a clear purpose. Tate Kimbrough (John Carroll), a wealthy debonair, had the temerity of having an affair with Bart’s wife while he was away, following which she committed suicide; and now Bart wants to avenge her death, and perhaps more importantly, preserve his own honour and male-ego. Ironically, Tate has finally decided to settle down, and while he’s taking his marital vows, Bart arrives in the church and announces his plans of killing him by the end of the day. What follows is an expected, but largely atypical, battle between the stubborn and borderline psychotic Bart, and Tate’s henchmen. Interestingly, their fight turns out of be the catalyst for even the town folks, who had bowed down to Tate’s position of power thus far, to finally stand up to him. And, understandably, this dramatic change of fortunes within the space of a day leaves Tate mighty bemused. Though bereft of spectacles or grand locales, and tad too slight for a psychological Western, it does deserve a watch, if not for anything else, for its cheeky reversal of genre conventions.

The psychology may seem slight but the subversion of the typical revenge scenario and the irony of the ending, when the Scott character is hailed as a town-tamer but is clearly a spiritually-ruined man, make this one of my favorite Boetticher westerns.

Yes, Boetticher did, very slyly and gleefully, subverted genre conventions & in turn audience expectations. The "protagonist" was far more beyond redemption than the "antagonist". Though I wouldn't consider among my favourites, Samuel, this indeed remains an interesting Western.

By the way, I'd be keen to know which are your 2 or 3 favourite Boetticher Westerns (preferably in order of preference). This happened to be my first tryst with his films, so willing to explore more.

It's not one of my favorite Boettichers, but I can't argue Samuel or anyone else that feels otherwise. I think your own solid but guarded review and sentiments Shubhajit are closer to my own. It's no NAKED SPUR.

Thanks Sam. Yes, it sure had its moments & qualities, even if it felt tad slight in the end. Need to watch more of Boettichers though.