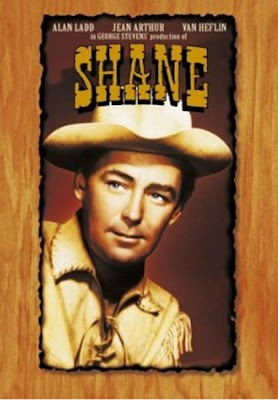 Shane was, at once, a throwback to the mood and structure of Classical Westerns, and an elegy to the imminent death of the masculinity, heroism and associated lawlessness of the mythical Wild West. It’s simple storyline masked grand and poignant themes which made this an emotionally and intellectually engaging watch. The film begins with an archetypal drifter named Shane (Alan Ladd) – a taciturn, amiable and mysterious loner – riding from out of nowhere to a tiny Wyoming town. He decides to settle down for a while with Joe Starrett (Van Heflin), a homesteader, and his family comprising of his loving wife (Jean Arthur) and young son. A power-hungry cattle baron (Emile Meyer), meanwhile, wants to drive the folks out of their lands, and even brings a menacing hired gun to add strength to his gang of bullies. But the headstrong Starrett, backed by the enigmatic Shane, form the biggest roadblock for him, and, as is the wont, a gunfight to settle scores arrives sooner than expected. Add to its underlying subtexts of Starrett’s wife developing feelings for the chivalrous Shane and his son almost hero-worshipping the gunslinger as he quite clearly represents a dying but incredibly charming breed, and the eternal conflict between capitalistic impulses and concept of communities, and you have an excellent  film, even if the battle between good and evil was anything but novel or spectacular. Ladd brought into his character quiet charisma and old-fashioned charm, making it a symbol for the changing times, a theme that Ford too brilliantly captured in The Man who Shot Liberty Valence. The glorious cinematography and affecting score aptly accentuated the film’s tone.

Very happy you mentioned the great score by the legendary Victor Young, which features one of the great themes in all of film music. But your entire review is a masterful encapsulation of one of the genre's most revered classics, and your first sentence is a beauty. This was perhaps the most celebrated performance from the young Brandon de Wilde, who died at the young age of 30 in a motorcycle accident outside of Denver. The blu-ray of this beautifully filmed benchmark of the western cinema will be released in a matter of weeks. Again great review Shubhajit!

Thanks a lot Sam. This was a strangely affecting film on account of the mood, the tone, the relationship that the titular drifter forges with the wide-eyed kid, the hints of revisionism, the underlying socio-political commentaries, etc. The director seamlessly fused all these aspects as a result of which none of them appeared out of their respective places. In fact I really liked the conversation that Meyer's character had with Starrett just after the half-way mark - it beautifully turned his character, which was appearing as just another screen villain till then, into a three-dimensional person. And yes, how could I have missed the affecting and very well used score. I'm sure it would be a splendid experience to watch it on blu-ray.