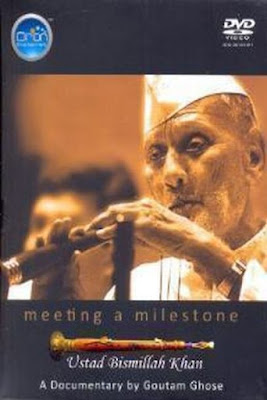 Ustad Bismillah Khan was to Shehnai what Ravi Shankar (or Vilayat Khan) was to Sitar, Alla Rakha was to Tabla, and Ali Akbar Khan (or Amjad Ali Khan) was to Sarod – viz. not just an exponent of Hindustani Classical music, but also someone who was synonymous with the instrument he played. But, despite his unparalleled mastery of Shehnai – the notes of which, as Tagore so unforgettably wrote in Kabuliwallah, sound as if one’s heart is weeping – his existence wasn’t limited to this prowess alone. Goutam Ghose, in his poetic and mellifluous documentary Sang-e-Meel Se Mulaqat, provided a rare peek into the life, thoughts, love and experiences that shaped this extraordinary artist. His passion and excellence, of course, were at the very forefront of this deliberately paced work, and which was further amplified by a number of absorbing “live” performances – both solo and with his troupe. And, what made it further interesting were the depiction of his all-consuming love for classical music; anecdotes recounted by him that brought forth his immersion into and journey with this form; his ascetic life; his incredible bond with the city of Benaras which he called home; his penchant for singing – which he expressed quite a few times – and his love for “Thumri” which, unfortunately, is viewed rather pejoratively by many; his ever-smiling and jovial disposition; and, in perhaps the most fascinating display of the maestro, his syncretic, broad-minded and secular mindset, while still being deeply rooted in his faith and culture. All these facets were captured through leisurely conversations, and were regularly interspersed with beautifully shot vistas of the teeming ghats, ancient mansions, winding lanes and the unmistakable atmosphere of Khan Sahab’s beloved city.