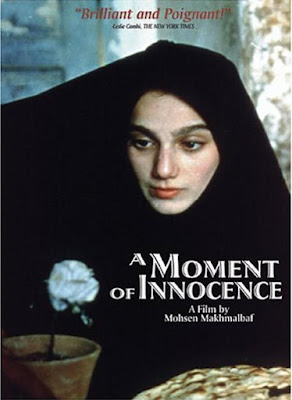 Mohsen Makhmalbaf had become involved, as a teenager, in a militant underground resistance against the Shah of Iran’s regime. As part of that he’d stabbed and wounded a policeman – in order to rob a bank, so that the loot could be pumped into the cause – but instead got caught and sentenced to death; fortunately, though, he was released after 5 years in prison during the Iranian Revolution. Two decades later he decided to make a faux-documentary relooking at this fateful incident that dramatically changed life’s courses for both men. A Moment of Innocence – considered his finest cinematic achievement – was made with wry irony, delicate touches and self-reflexive brilliance; infused with cheeky humour; and composed as an ingenious hybrid of documentary, performative elements, reinterpretation of one’s memories and meta commentary on the medium itself. He therefore revisited this pivotal episode, but in a fascinating creative choice, did so by reconstructing that in the form of a movie in production; and, if that weren’t enough, he partnered with Mirhadi Tayebi, the very person he’d attacked and a wannabe actor now who he got reconnected with during the mock auditions staged in his idiosyncratic previous film Salaam Cinema. As the two men pick their younger selves and – through dryly funny means – coach them in their perceived images of themselves from so many years back, the film also tenderly revealed the divergent motives that drove them then, viz. political idealism for Makhmalbaf vis-à-vis hopes for first love for Tayebi courtesy a girl who – unbeknownst to him – was the latter’s cousin (and well, first love too). And, lest one forgets, it ends with an unforgettable freeze frame that brilliantly subverted the proceedings thus far.