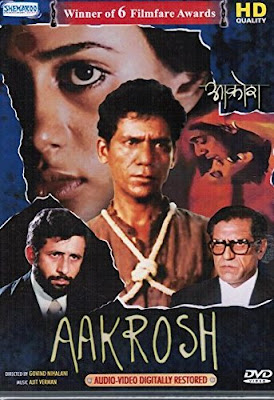 Govind Nihalani – former cinematographer who became one of the doyens of the “Parallel Cinema” movement in India (so-called because it ran both artistically and commercially in parallel to the country’s thriving popular film industries) – made an explosive and unflinching directorial debut with Aakrosh. It brilliantly straddled the lines between lashing social commentary and gripping conspiracy thriller – where both powerfully cohabited thanks to the foundations laid by renowned Marathi playwright Vijay Tendulkar’s gritty, angst-filled script (who Nihalani would collaborate with again in what remains his most well-known film, Ardh Satya) – while delivering a ferocious indictment against caste-based discrimination, marginalization, exploitation, oppression and violence that have been perpetuated against those in the bottom-most social rungs. Its central crux – where a group of chauvinistic, power-drunk upper-caste men brutalize an Adivasi woman with brazen impunity – was as prescient then as it’s now, reminding one of the ghastly recent incidents of Unnao, Kathua and Hathras. The story broadly revolved around two men – Lahanya (played with scorching power by Om Puri, who emoted through his eyes and hardly spoke), an impoverished daily labourer framed for the death of his wife (Smitha Patil), and Bhaskar (played with vigour and idealism by Naseeruddin Shah), a young lawyer who upon being assigned the case doggedly pursues it despite increasingly ominous threats. In an ironic play, the person prosecuting Lahanya is a hotshot lawyer (Amrish Puri in a commanding turn), belongs to the Adivasi caste himself and regularly receives anonymous hate-calls, though he hobnobs with fellow bigwigs and coldly believes in legally admissible evidence. The film also featured Mahesh Elkunchwar – another noted Marathi playwright who’d later collaborate with Nihalani in the lacerating satire Party – as a Marxist social worker.