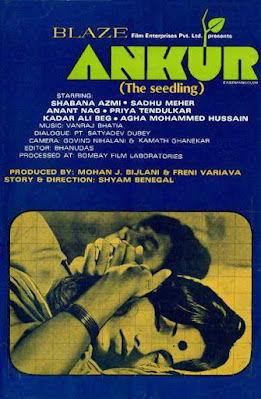 Shyam Benegal’s prescient, evocative and simmering debut film Ankur operated at the intersection of various hideous social evils – patriarchy, caste discrimination and class divides – within an oppressive feudal structure. Abuse of social capital, fragility of women’s agency, and brazen inequities at play at every stratum – and in turn, various permutations of power imbalances, on account of the three variables of caste, class and gender – were at the forefront of this disarmingly lucid and lyrical tale. The various observations and indictments, however, were organically enmeshed into the proceedings such that the pointed social commentaries only gradually and progressively simmered, until the gut-wrenching finale leaves one scalded with its fury. Interestingly, it started off on a simple note as Surya (Anant Nag), who detests his overbearing father’s mistress and wishes to study further, is compelled to take administrative charge of their lands in a nearby village. Thereafter it transitions into a complicated love story as he, while waiting alone for his wife to reach puberty, becomes attracted to and boldly begins an illicit relationship with Lakshmi (Shabana Azmi), a penurious Dalit woman married to a deaf-mute man (Sadhu Meher) who’s taken to alcoholism upon losing his pottery trade and exacerbated by his inability to impregnate his wife. Things, however, take bleaker turns as Surya’s seemingly demure young wife (Priya Tendulkar), upon eventually joining him, immediately develops an open dislike for Lakshmi; and then, upon Lakshmi informing that she’s pregnant, the unequivocal revelation that Surya’s earlier persona was essentially a sham. Azmi, in her debut role, was terrific as an exploited woman who refuses to go down silently despite being at massive disadvantage on all three parameters, viz. gender, caste and class.