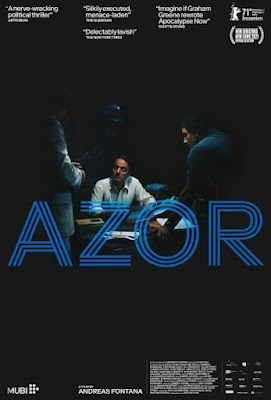 Andreas Fontana, in his directorial debut itself – based on a screenplay jointly written with Mariano Llinás, who made the gargantuan masterwork La Flor – created an ominous, viscerally unsettling, impeccably designed film, on a politically sordid and morally murky subject, with Azor. This superb conspiracy thriller addressed two facets from Argentina’s macabre “Dirty War” period – the grotesque, fascist civic-military dictatorship during which extermination of left-wing intellectuals, journalists, students, unionists and political dissidents was so rampant, that even a false word – even by someone who’s affluent and well-connected to the establishment – could get one disappeared; and, the odious role played by Swiss banks in perpetuating the murderous neoliberal junta, under the guise of “neutrality”. Yvan De Wiel (Fabrizio Rongione) is a Swiss private banker – he’s one of the honchos of a firm, co-founded by his grandfather, that discreetly manages finances of the super-wealthy – who’s come from Geneva to Buenos Aires to retain their most elite clients after his partner René – a flamboyant, charming and enigmatic man – has mysteriously disappeared, possibly into “some Argentinian basement” like so many other dissenters. He’s smooth and appropriately low-key in his demeanour, proficient in multiple languages, always conservatively dressed in expensive suits, comfortable amidst lazy and plush elegance, and is accompanied by his alluring, savvy wife Inés (Stephanie Cléau) who’s his confidante and co-conspirator. As he navigates into ranches, villas, exclusive clubs and secret outposts, with measured steps and eerie calm, to retain his prized clientele, he gets drawn into the rotten core of evil. That he displays implacable willingness to participate, despite becoming increasingly aware of the monstrous repressions around him, made this gorgeously photographed and scored film all the more riveting, sinister and frightening.