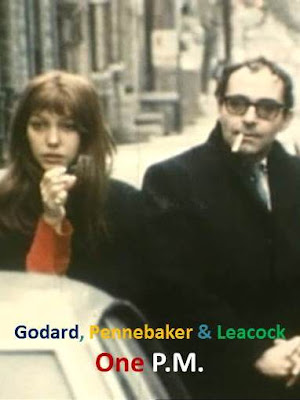 The fascinating rise of New Left, Black Power, anti-war protests and the counterculture movement had excited Godard to the extent that he felt that revolution was imminent in the US. And hence, to capture this potentially epochal moment, he joined hands with Direct Cinema pioneers D.A. Pennebaker and Richard Leacock on One A.M. (One America Movie) where he envisioned a synthesis of cinéma vérité and heavily experimental formal fluidity, through blending of “real” with its fictionalized representations / interpretations. However, mid-way through the production, he lost interest in the project – compounded by the realization that there’s no revolution coming – and hence abandoned it. Pennebaker, thereafter, compiled the footage – including a fair bit that he’d shot on the making of it – and released that under the revised moniker of One P.M. (One Parallel Movie). The work, as may therefore be conjectured, wasn’t anything how Godard had envisaged as part of his indictments on imperialism, capitalism, racial oppression, social inequality and the military-industrial complex. Rather, it was often disjointed and transitory. It has instead become an intriguing time capsule, an evocation of the 60s zeitgeist and a peek into what this might’ve been. This alternate version, which begins with a lyrical sequence featuring two little girls in an industrial waterfront (ironically, Godard had intended to end with this vignette) comprised of six tableaux – activist Tom Hayden sharing his views on labour rights and Vietnam War; Eldridge Cleaver speaking about black experience and carceral society; sequences featuring Rip Torn, including in a working-class school; a passionate street music performance by black nationalists; interactions with a Wall Street woman; and a scintillating roof-top gig by Jefferson Airplane that gets cops running helter skelter.