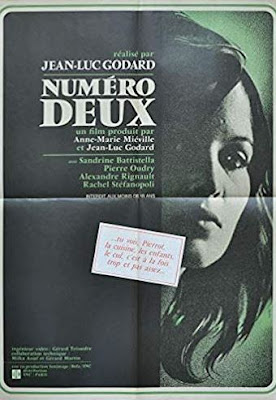 While his Nouvelle Vague phase was defined by his distinctively anarchic voice and auterist signature, and his Dziga Vertov Group phase by his confrontational Marxist-Maoist politics and dissociation from bourgeois aesthetics, Godard’s third phase – the brief and obscure “Sonimage” period where he begun collaborating with Anne-Marie Miéville, who’d become his companion too – was marked by complex, esoteric and eclectic essays made on low-fi video. Numéro Deux, the first film in this creative burst that formed a vital preamble to his enduring association with video technology – and made after three years of isolation – was as formally dazzling and fabulously experimental a work as it was defiant, challenging, minimalist and profoundly meditative in its discourses on working class, women’s agency, politics, sexuality, banal domesticity, consumerism, mortality and cinema. It began with a disheveled looking Godard’s deadpan monologue on the financing of this project and how everything – from people to places – can be likened to either factories or landscapes; these, while football, news, etc. played in the background in his cramped, poorly lit Grenoble editing room. It then provided muted and disconcertingly candid glimpses into the seemingly quotidian lives of a middle-class family comprising of a sexually liberated married couple – a philandering husband and his bored housewife – their lively kids, and the grandparents. The political and feminist commentaries were brilliantly allusive, except for a short section where the grandfather recounts memories of his guerilla communist resistance days during WW2. And, like how Warhol did in The Chelsea Girls and Luis López Carrasco would later do in The Year of the Discovery, the vignettes were audaciously presented through parallel television screens that added layered, disconsolate and even troubling commentaries through this electrifying juxtaposition.