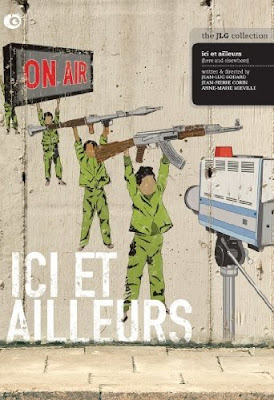 During 1970, DVG compatriots Godard and Gorin travelled to Jordan, Lebanon and the West Bank on the Arab League’s invitation in order make a film in support of Palestinian people and causes – whilst covering the lives, training camps and struggles of the fedayeen (guerilla fighters) – titled Jusqu'à la Victoire (Until Victory). However, when most of their subjects were killed by the Jordanian army during the Black September conflict, they shelved this project. 6 years later during Godard’s “SonImage” transitional period – by now he’d parted ways with Gorin, begun collaborating with Anne-Marie Miéville, and moved to a post-DGV period marked with abstruse, eclectic, avant-garde video essays – the unfinished work was revived and converted into a complex, dense, deconstructive and somber meditation on politics, oppression, media, propaganda, and the intertextuality of images and sounds. It was positioned along and informed by two key thematic concerns – meta-analysis on cinema as political weapon, alongside a sharp autocritique. These examinations were conducted using oblique analytic devices – footage of Palestinians in occupied territories in the Middle-East from his earlier abandoned film, complemented with those of a working-class French family watching TV at their cozy apartment in Paris, thus emphasizing the underlying duality of “here” and “elsewhere” in the film’s title. And these were accompanied by reflections on images and videos – be it the consumerization of resistance and struggle or the indictments of war, fascism, colonialism and militarism through juxtaposed visuals of Hitler, Golda Meir, Nixon, Kissinger et al. As a postscript to the film’s polarizing legacy, a Zionist group had planted a bomb at the theatre in Paris where this was being screened, but fortunately it was diffused before any damage could be caused.