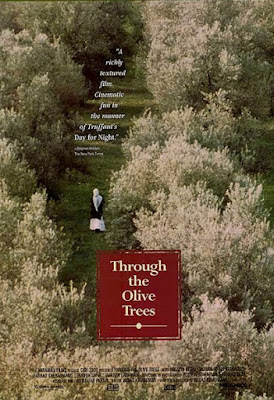 Cinema doesn’t get any more quintessentially metatextual or delightfully self-reflexive than Through the Olive Trees, the enchanting final installment in Kiarostami’s endearing ‘Koker Trilogy’. It was also the funniest and the most formally playful of the lot, mixing situational humor and gentle satire – but suffused with empathy, warmth and humanism – while portraying the lilting simplicity of village life, a quirky romance, the enervating process of movie-making, and thereby a lyrical examination of how cinema interacts with the world that it’s attempting to capture, delineate and interpret. It revolved around the behind-the-scenes making of Life, and Nothing More…, the trilogy’s second part, which in turn was about searching for the actors (Babek and Ahmed Ahmedpour) who’d played the kids in Where Is the Friend’s Home? In other words, it had Kiarostami directing a man (Mohamad-Ali Keshavarz) who’s playing a filmmaker and a stand-in for Kiarostami, and who in turn is directing a film within the film where another man (Farhad Kheradmand) is also doing the same! A key strand here involved the deadpan and dogged romantic pursuit by Hossein Rezai, a young bricklayer, desperately trying to woo Farkhonde, who adamantly refuses to respond to his relentless courting as her family has turned him down for being homeless and illiterate; and, ironically, the young lady – with a surprisingly firm voice of her own despite being a person of very few words – plays Hossen’s on-screen wife in the film being produced. Kiarostami made engrossing use of long shots, long takes, POV shots and deliberate repetitions; memorably captured the people, their lives and the landscapes; and ended the film with a sumptuous final shot that unforgettably summed up the human comedy contained therein.