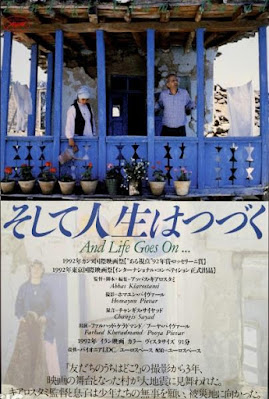 Life, and Nothing More… – the second chapter in Kiarostami’s inextricably inter-connected ‘Koker Trilogy’, even if the virtuoso filmmaker wasn’t overly fond of this nomenclature – made for an absorbing faux-documentary, manifesting the tantalizing metanarrative he’d resorted to in his mesmerizing masterpiece Close-Up which preceded it and the trilogy’s heartwarming final chapter Through the Olive Trees. He wanted to find out if Babek and Ahmed Ahmedpour – the kids who’d acted in the trilogy’s delectable first chapter that’d made him a household name, Where Is the Friend’s Home? – were doing alright in the aftermath of the devastating 1990 Manjil–Rudbar earthquake that killed over 40,000 Iranians. Hence he revisited Koker and made this docufiction portraying the unassuming, deadpan odyssey where the act of getting there was more important than the destination itself. This low-key road movie followed the journey of a gentle-natured filmmaker (Ferhed Kherdamend) – stand-in for Kiarostami himself – and his affable son (Buba Bayour), from Tehran to the hilly village in his ramshackle car. Along the way he encounters both physical repercussions and existential embodiment of the tragedy. On one hand, he witnesses the massive destruction, choked highways and houses turned to rubble, whereas on the other he experiences the resilience displayed by people – young bridegroom, weary grandmother, feisty mother, stoic kids, homeless youngsters making arrangements to watch the football World Cup – despite their incalculable losses. And, while he gets to meet the endearingly chatty old carpenter and the boy whose back hurt from the earlier film, he’ll need to gather all his reserves of obstinacy and push his car to its limits in the film’s dryly comic and stunningly composed parting shot in order to catch-up with the two kids.