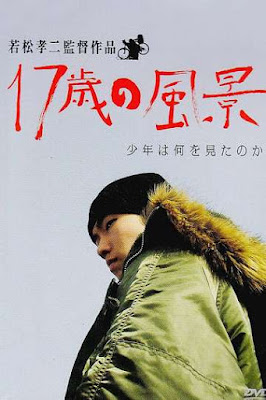 Cycling Chronicles perhaps remains among the most surprising departures in Kōji Wakamatsu’s career and indicative of his ability to defy perceptions by reinventing himself. Arguably best known (albeit, tad reductively) for his towering role in the sexploitation genre in Japanese cinema – viz. “pinku eiga” or pink films – this late career work was, instead, a sombre, low-key, brooding and lyrical film. However, that said, the defiantly non-conformist, underground filmmaker’s radical politics – his long-standing critic of Japanese societal malaise and its dark, troubling history – were emphatically on display here, be it in its evocation of the themes of alienation, disaffection and dysfunction, or in its bristling commentary on the country’s past mired in war-mongering, colonialism and despotism. Largely devoid of a conventional narrative arc, it’s centered on a nameless teenager (Tasuku Emoto) who’s cycling around – seemingly aimlessly, but in monomaniac frenzy – around the country. As he traverses through the bustling city of Tokyo, few smaller towns, and across the ravishingly shot landscapes – from seasides to mountains – we get to know through a few hazy, tad lackluster flashbacks that he’s recently killed his mother for reasons not clarified. And, along the way, he has a few intriguing chance encounters – with a disgruntled old man haunted by the scars of WW2, an elderly woman of Korean origin who was brought here many decades back as a “comfort woman”, stray fishermen who’re forced to survive in the fringes – that eloquently underscored Wakamatsu’s political angst. While the finale felt too heavily laden with Sisyphean symbolism, various aspects of the film – the old man’s long, discomfiting and deadpan monologue, the moody sense of existentialism, catchy soundtrack and arresting visuals – made it a disorienting, meditative journey.