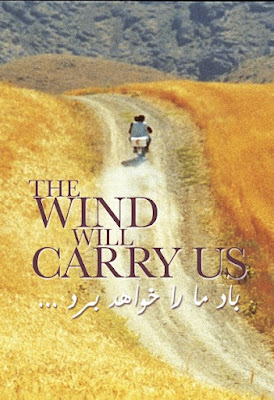 Kiarostami achieved a sublime confluence of austerely realist portrayal and metaphysical meditations – intermingling narrative build-ups with wry asides, and stylistic simplicity with formal rigour – with The Wind Will Carry Us. That it capped a stunning run of cinematic gems Where Is the Friend’s Home? onwards, was subtly manifested via elements from some of them – be it the maze-like housing pattern in the above film or the underplayed humanism in Life, and Nothing More… or the transformative journey of a man through unanticipated interactions in Taste of Cherry. The film began with a disarmingly long-winded voyage of Behzad (Behzad Dourani) – an inquisitive, cynical man with a dry wit and love for poetry – and his colleagues, engaging in rambling conversations while they’re travelling from Tehran to an impoverished Kurdish village. Close to their destination they meet Farzhad (Farzhad Sohrabi), a young, intelligent and studious boy from there, who guides the last leg and with whom Behzad develops a beautifully affecting friendship. As it eventually emerges, the protagonist is heading a small crew who’re there to document the mourning rituals that the villagers carry out when someone – in this case an elderly lady – approaches death, but introduces themselves as engineers to mask their motive. Interestingly, we never see his colleagues or the elderly woman, leave alone the rituals as the latter’s frail health, ironically, starts improving. Kiarostami, instead, covered the sardonic man’s journey as an person through his myriad interactions with the people there – the kid, a telecom worker, his shy girlfriend, a weather-beaten matriarch, a school teacher, a profoundly philosophical local doctor – during his elongated stay at this hamlet with a near surreal architecture and surrounded by ravishingly beautiful landscapes.