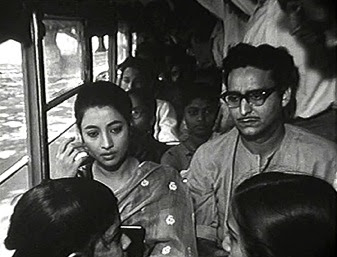 Ajoy Kar would forever be remembered for Harano Sur and Saptapadi, two of the most enduring romantic films that took the legendary Uttam Kumar-Suchitra Sen pair to its zenith in Bengali pop culture. Though Saat Pake Bandha might pale in comparison in terms of sheer popular success, this heart-wrenching examination of marital breakdown would probably remain as his greatest achievement; and, possibly Suchitra Sen’s too along with Deep Jwele Jai. The film begins with Archana (Suchitra Sen), a disillusioned lady on a self-imposed exile, taking the job of a teacher in a school. After coldly spurning the advances of a besotted young colleague, she starts reminiscing about her life. Thus, through extended flashback sequences, along with voiceovers to reflect her inner turbulence vis-à-vis her stoic demeanour, we are told about her falling for Subhendu (Soumitra Chatterjee), an erudite college professor, and their subsequent marriage. Unfortunately, post the initial bliss, their economic difference and the presence of her overbearing mother start making inroads into their happiness; and these, along with their own egos, take them beyond any chances of reconciliation. Though not a flawless film, this was nonetheless a realistic, nuanced, affecting and brilliantly enacted work, and comprised of a recurring and mesmerizing background score by Hemanta Mukherjee that managed to beautifully accentuate the movie’s themes of lost love, separation and one’s futile attempts at coming to terms with that. The masterclass slow overhead zoom-out shot of the emotionally imprisoned Archana lost in thought in her rocking chair with which the movie ends, with the haunting motif softly playing on the background, was a truly heartbreaking moment. The movie was remade in Hindi as Kora Kagaz.

The fact that you have this film under "essential" viewing Shubhajit, would be enough to seek it out, but the story of the teacher with inner turmoil and the relationship that ensues make it dramatically intriguing. If the opportunity arises I will certainly follow-up.

Thanks Sam. Yes, this is a wonderful movie and worth checking out.