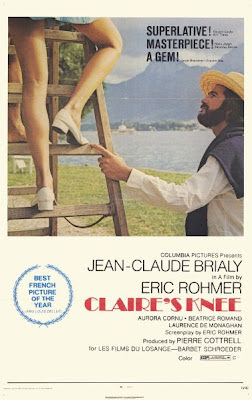 Claire’s Knee, the penultimate film in Eric Rohmer’s legendary ‘Six Moral Tales’ series, ranks as one of his most renowned works. Though it comprises of a deceptively simple plot, the themes of sexual politics, morality and one-upmanship make for a gleefully delectable watch, and manages to appeal as much to the senses as to one’s intellect. Jerome (Jean-Claude Brialy), an upwardly mobile and well-read diplomat, is on vacation at his picturesque summer retreat in the French countryside. He gives far higher priority to his brain as opposed to his heart, and this trait has made him decide to get engaged to a lady he likes spending time with despite not really being in love with her. During the vacation he reconnects with an old friend Aurora (Aurora Cornu), who is an author, and meets Laura (Beatrice Romand), a capricious teenaged girl who develops a crush on him. He whiles his time by engaging in long intellectual conversations with Aurora and at times casually flirting with Laura. However, these all come to a halt upon the arrival of Claire (Laurence de Monaghan), the ravishing half-sister of Laura. He immediately gets attracted to her, and develops a strange fetish – that of caressing her knees; the fact that unlike most women she doesn’t think much about him and is rather engrossed with her brash boyfriend, takes his intense longing to the level of obsession, even though he carefully cloaks that in front of Aurora as well as to his own sense of morality by resorting to pseudo-intellectual banter. Nicely enacted, wonderfully paced, and comprising of deft observations, humour and irony, this ranks as one of the most assured, perceptive and captivating films in Rohmer’s oeuvre.

It may be Rohmer's greatest masterpiece, but it is at least among his very best films much for the reasons you broach in this exceptional short essay. You've done some real great work on Rohmer on these pages!

Thanks a lot Sam for the appreciation. Yes, this would make for a strong claim if one were to make a list of Rohmer's greatest masterpiece.