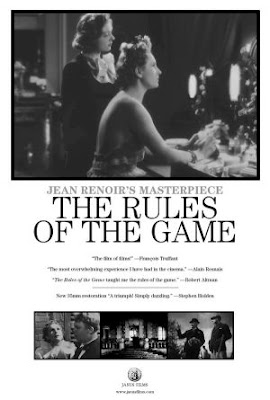 Jean Renoir’s The Rules of the Game didn’t receive a favourable reception upon its release from the viewers and critics alike; even the powers that be tried to destroy the prints. It received a proper release nearly two decades later, and since then it has come to be recognized as one of the greatest films ever made. The movie is about a lavish party thrown by wealthy aristocrat Robert and his wife Christine at their palatial manor house in the Parisian countryside. Andre, a national hero in love with Christine, Octave, the lady’s buffoonish childhood friend, Robert’s mistress on the sly, and a garrulous General, are among the various guests invited – consequently numerous complications arise as a result. Meanwhile, complications also crop up among the servants when the gamekeeper of the house notices that the new recruit is flirting with his wife who happens to be Christine’s personal maid. While those belonging to the upper floors are more interested in preserving their show of geniality and propriety, such is not the case with their lower floor counterparts. Thus this party becomes a microcosmic representation of the society at large, and the ensuing comedy of manners a scathing commentary on both class divisions and human behavior. Though some of the plot developments and the acting (which is quite over-the-top at times) might seem dated by today’s standards, there’s no doubting its artistic merit and in its usage of fluid camera movements and deep focus. It also provided the template for such diverse movies as Bunuel’s Exterminating Angels, Altman’s Gosford Park, Nihalani’s Party, among others.

The references are very interesting at the end,I never thought about it.Anyway,it is my top 3 film and my fave French film for sure.The camera movement is so refreshing,it moves all the time.And the half-comedy-half -tragedy story,those colorful characters,oh,what a film!!

Thanks David. Yes, this was a trendsetter film that provided template for countless films to follow. A world cinema classic on similar lines would be Kurosawa's Rashomon (the 'Rashomon Effect'), Hitchcock's Rear Window (accidental witnessing of a murder), Huston's Asphalt Jungle (crime from the pov of criminals), etc.

RULES OF THE GAME is of course one of the most celebrated films ever made, and for years has been named by avrious critics groups and Sight and Sound as among the five best films ever, but that doesn't even begin to describe the enormous brilliance it has exerted world-wide (as you note) and the artistry that it exudes. One of France's most revered films.

Thanks Sam. Yeah, this is one of those "certified classics" - a movie that nearly every critic has in his/her Top 10 films of all time. I'd love to revisit this movie at some point of time as I felt one viewing is not really sufficient to fully appreciate it fully.