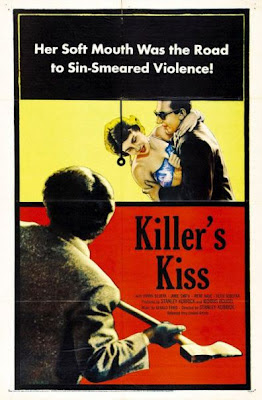 Killer’s Kiss, Stanley Kubrick’s second feature, provided enough signals of the young filmmaker’s propensity for splendid visual storytelling, and formed a noteworthy precursor to his brilliant film noir followup, The Killing. Made on a shoestring budget, the movie had the simple one-line premise of most romantic film, viz. ‘boy meets girl, boy loses girl, boy wins girl’; but, like most noirs, things didn’t ensue in such a simplistic manner. Told completely in flashbacks, it deals with Davy Gordon (Jamie Smith), a washed out boxer, who silently observes and has fallen for the resident in the opposite facing apartment – Gloria Price (Irene Kane), a nightclub dancer. He gets serendipitously acquainted to her when he runs down to her place upon hearing her shrieks. As it turns out, Vince Rapallo (Frank Silvera), her thuggish boss, is not just enamoured, but also obsessed with her. Davy and Gloria quickly fall in love, and they plan to leave New York City for a quieter town where they can escape their failed lives, but unbeknowest to them, the vicious Rapallo has other plans for them. The performances by the actors were quite stilted, while the dialogues and the vanilla narrative too were mediocre at best. However, despite its various flaws the movie had its moments – the foot chase over rooftops sequence and the brutal faceoff between Davy and Rapallo at a mannequin warehouse, were wonderfully done. The most memorable aspects about this crisply timed film were its exquisite expressionistic B/W photography and visual detailing; the scene where Davy’s manager is murdered in a dark alley made for a truly striking and visceral moment.

The cinematography really stood out in this film,I think it's even better than The Killing.The dancing scene is terrifically illuminated,the warehouse fighting scene sent me chills all the way,one can easily recall the scene in Polanski's Repulsion where Deneuve was held by dozens of hands from the wall.

Well, without going into comparisons (because The Killing holds a far greater place for me in every aspect of filmmaking), the cinematography in Killer's Kiss was undoubtedly excellent. And yeah, that fighting scene was really disorienting & disturbing - not just the unforgettable scene in Repulsion that you've mentioned, it also in a way reminded me of the house of mirrors scene in The Lady from Shanghai. Thanks a lot David for the comment.

Certainly not at all the equal of THE KILLING, but still for a host of reasons a film that can't be dismissed, and essential in a full study of Kubrick. Yes the expressionistic black and white photography was the key element. Nice work as always!

Yeah, it doesn't even come close to the fatalistic beauty of The Killing, but it still makes for an interesting double-bill with it. And for Kubrick aficionados, it also provides a glimpse into his fast evolution as a filmmaker par excellence.