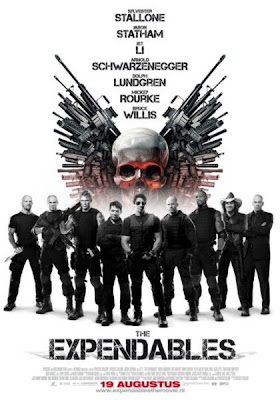 Anyone who, as kids, grew up watching the slam-bam fist-pumping testosterone fueled action blockbusters that Hollywood loved dishing out during the 80s and 90s, would have given an arm and a leg to see Arnold Schwarzenegger and Sylvester Stallone, the two biggest action superstars of that era, battling the bad guys together. But such a coup was never brought about then. Consequently, The Expendables provided for a much belated realization of the wet dream for the child who possibly still resides in me to see Arnie and Sly sharing screen-space, albeit for a very short while – that Bruce Willis, another contemporary of the two now-ageing and hulking former larger-than-life stars, was also there, made that short scene even more memorable. A number of modern-day action stars are there in it along with Stallone in its all-star cast, including the likes of Jason Statham, Jet Li, Mickey Rourke, and “Stone Cold” Steve Austin, among others. The movie’s plot, style and execution, too, are a throwback to (and a parody of) the aforementioned decades – a group of elite mercenaries, who operate miles outside the law, being given the clandestine task of liquidating the tinpot dictator of a South American country. Unbeknownst to them, the dictator is being backed by a rogue CIA agent; the group is on the verge of calling off this mission, but decides to go back nevertheless as Ross (Stallone), the group’s de facto leader, has developed a soft corner for the dictator’s rebel daughter. What follows in this no-brainer and hyper-explosive display of machismo is, to use a very mild descriptor, utter rampage. Understandably, watch it only if you grew up in the said era.

Not the sort of film I would expect you to watch and review! I was quite entertained, and in the mood for something light, my expectations were appropriately low. Had a few cool lines of dialogue that kept me amused.

Haha, yeah, I too was in a mood for something light and fun, and stumbled upon this being played on the TV. So watching this movie happened by chance, and it was really fun watching a low-on-brains and high-on-muscles action movie after a very long time. I wasn't aware that Rambo First Blood might have been "inspired", I'' check out your review of Lonely are the Brave shortly. Thanks Chris for stopping by.

Shubhajit I agree that once in a while you must step back from the auspicious and art house fare, even when reviewing. I don't actually think I have seen this particular film, but if I did I am sure I would be coming up with the same conclusions that you presented here so tactfully.

Yeah, its fun to take a break from serious stuffs once in a while, sit back, and watch a mindless action flick like this once - and yes, forget about it as soon as the end credits start rolling.

this is the site that you will get entertained. i like this site..watch the expendables 2 movie online for free. .Thank you. .:)