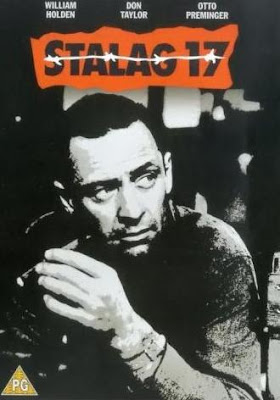 Stalag 17 might not rank among Billy Wilder’s best works, what with a plethora of legendary movies in his oeuvre, yet it remains a highly competent and enjoyable film nonetheless. One of the first war movies focused on war-time prisoners rather than on-field action, so to speak, the story is completely based in a German POW camp filled with American Sergeants and supervised by a brutal German commandment (played by Otto Preminger). The inmates here are always on the prowl for escape and other rebellious activities, but are forever thwarted owing to the presence of a spy among them. One of the inmates, Sefton (William Holden), stands as the odd man out among them – not just because of his cynical nature and the various enterprises that he runs, but mostly because he seems as someone who just doesn’t care. The situation gets especially charged when the damning secret of a newly transferred Lieutenant gets into the hands of the commandment leading to possibly dire consequences for him. Despite the serious nature of the plot, the movie is surprisingly humorous with its share of slapstick gags and darkly comic moments; and this seamless balance of comedy with emotionally resonant as well as nerve-racking drama made this crisply photographed and well-paced film such an engaging work. Holden delivered a fine turn as the embittered outsider, and he was ably complemented by a string of noteworthy supporting turns.

Glad you mentioned the humourous aspects of the film, because I think the movie is really funny, but also contrasted with the darker side as well. I think I like the movie more than you do though and I think it's a flat-out masterpiece. Might be Holden's best work on film, although he's pretty great in Sunset Blvd. though. I also like him in The Bridge on the River Kwai in a smaller role.

Thanks Jon. Yes, I guess your appreciation for this film far exceeds mine. However, though I wouldn't consider this as a masterpiece, it remains a wonderful and highly enjoyable movie nonetheless. And yeah, as you noted, Holden did give a really good performance here, as he did Sunset Blvd & The Bridge on the River Kwai, among others.

You talked about humor in film. The film is funny but also subtle with helps keep the viewer focused on the main story.

Yes, indeed, Devis. Wilder made great use of humour in the film, which made the movie funny yet as affecting. Thanks.