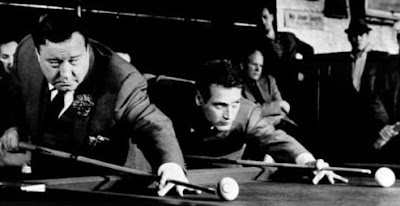 The Hustler, based on Walter Tevis’ novel of the same name, boasts of awesome pool-play, but it would be a folly and a great disservice to the movie to simply qualify it as a sports movie. This grim and deeply existentialist drama provided an incredible sketch of a man struggling to find the balance between “talent” and “character”. Paul Newman gave a stellar performance as the flawed anti-hero “Fast” Eddie Nelson, a charismatic pool player whose arrogance and lack of direction have stalled his jump from being a mere hustler to being a winner. It takes a great personal tragedy for him to finally come to terms with his gift as also his sense of being. Newman received great support from Piper Laurie as Eddie’s alcoholic girlfriend, George C. Scott as a shrewd and ruthless gambler who takes Eddie under his wings, and Jackie Gleason as the reigning pool-champion Minnesota Fats who Eddie goes after – initially for money and pride, and later in order to redeem himself in his own eyes. The wonderfully written movie was as much a Newman-vehicle as it was Robert Rossen’s – the final masterwork of the director after he relented to testify at the House Un-American Activities Committee in order to save his career (he had initially been blacklisted for having refused to do so). The terrific B/W photography memorably captured the dark and alienating pool-rooms, the movie’s hard-edged realism and Eddie’s sordid existence, while the soulful jazz-based score imbued the film with melancholy and poignancy.

A great film and a great review. I also love the Color of Money too. Newman is terrific.

"The terrific B/W photography memorably captured the dark and alienating pool-rooms, the movie’s hard-edged realism and Eddie’s sordid existence, while the soulful jazz-based score imbued the film with melancholy and poignancy."

Indeed Shubhajit! I am a big fan of this film. I love the cast and the cinematography is quite striking. Although it starts out seeming like it's going to be a sports movie, it definitely rises above this and becomes something else entirely, all for the better in my opinion. Great stuff friend!

Thanks Dan. Yes, I too liked Color of Money. In fact, review of the Scorsese movie would be up next.

Thanks a lot Jon. The cinematography played an important role in capturing the mood and atmosphere. In fact, despite being filled with so many flawed characters, the movie itself was nearly flawless!

Terrific review here, definitely one of your Hall of Fame capsules. It is indeed far more than a sports movie, it's underpinnings are existential and both the stark cinematography and brilliant script collaborate with powerhouse performances. One of teh best American films of it's period.

Thanks a lot Sam for the appreciation. Yes, it sure ranks as one of the best American movies of the 60's. Great acting was complemented by equally terrific moodiness to create a movie worth watching multiple times over.