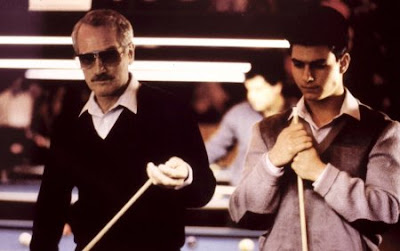 Though a sequel to the brilliant and much-loved The Hustler, Martin Scorsese’s The Color of Money was however a very different movie altogether – both in terms of their tones (flamboyant as opposed to understated) and the principal protagonist’s nature (wizened as opposed to brash). Former pool-hustler “Fast” Eddie Felson hasn’t held a cue and played pool in over two decades, and is now a well-to-do middle aged guy whiling his time peddling alcohol. However, the game still continues to remain close to his heart, and when he notices Vincent (Tom Cruise), an arrogant young guy with superb pool-skills, he spots an immediate opportunity to renew his connect with the game, relive his younger days as a hustler, and make some money in the process by donning the role of his manager. They two hit the road along with Vincent’s gorgeous and grabby girlfriend (Mary Elizabeth Mastrantonio). He teaches his protégé the tactics of luring wealthy opponents by curbing his instincts for ostentations. Their relation was however doomed to start with, and Eddie finally decides to call it quits. He in turn decides to be an honourable player for once by registering himself to a proper pool-tournament being held at the Atlantic City, which inevitably leads to the much-anticipated showdown of both skills and wits between the fatherly patriarch and the Young Turk. Among the more commercial of Scorsese’s ventures, it lacked the depth and profundity of the Robert Rossen version; nonetheless it was still an engaging watch for me. And Paul Newman gave yet another stellar, nuanced turn as “Fast” Eddie.

Yes, Subhajit it did indeed lack the depth and profundity of it's predecessor, and in large measure I'd say it's Martin Scrsese's least remarkable film. But yes, as you say in your pitch-perfect capsule it's engaging enough and Newman shines.

Thanks Sam. Yeah, despite not being a great film per se, the film was quite a fun & entertaining watch. And yes, it wouldn't rank as one of Scorsese's best work.