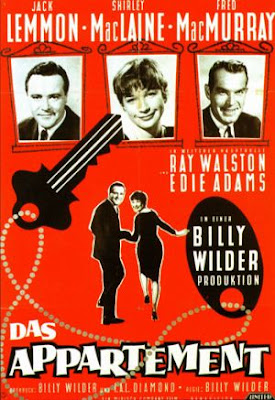 A few years back I’d seen a movie called Life in a Metro where one of the segments, as I’d found out, was “inspired” from The Apartment. Though I’d been wanting to watch this Billy Wilder classic since then, somehow I managed to do so only recently. Widely regarded among Wilder’s best works, this offbeat and bittersweet romantic comedy managed to bring smiles to my face despite, in essence, being a tragedy for most parts. C.C. Baxter (Jack Lemmon) is a desk clerk at a huge insurance corporation, rising through the ranks at a brisk pace thanks to his willingness to loan out his apartment to his philandering superiors. This information soon reaches the ears of his slimy married boss (Fred MacMurray) and he too muscles his way into the bandwagon – the only catch being the girl the latter intends to be along with in his apartment is the cute and gullible elevator girl (Shirley MacLaine) Baxter has fallen in love with. Though filled with enough humour and wit to keep one laughing, its cynical and bleak depiction of high-flying corporate life, culture and mores, as also human loneliness and dearth of human values amidst the urban jungle, are impossible to ignore. And yes, neither can the inherent melancholia can be avoided. The movie boasts of terrific dialogues and a host a memorable moments, and not to forget, great performances by both Lemmon and MacLaine.

One of my favorite movies of all time! Shubhajit great write up! I'm surprised it took you this long to see it, as it's hard to avoid this one and for good measure. Lemmon is terrific, and Shirley MacLaine is simply spectacular in this - sexy, warm, improvisational, and melancholy. I love, love, love her in this.

Haha. Well, better late than never, I guess :) Yes, I too am wondering what took me long to watch this really nice movie. And yeah, both of them were fabulous in it. Thanks a lot for stopping by.

Thanks a lot for the appreciation. I sure intend to keep up the "good work". I'll check out the site you've recommended.

This is one of my favorite Wilder's, and I'd take it's closing line over even Some Like It Hot's. Shirley is cute as hell. I wouldn't call it a tragedy, though if that hadn't been a cork at the end, it certainly would be. Have you seen The Crowd? That great opening shot is a definite homage (if you've not seen the whole thing, you've probably seen that shot, not saying where ;) )

Yeah, this is a great Wilder movie for sure. Though, among the ones I've seen so far, I'd place Sunset Blvd, Double Indemnity, Ace in the Hole, and perhaps even Some Like It Hot over it, but that doesn't take anything away from it cos Wilder specialised in making one great film after another. As for The Crowd, I haven't seen it yet. I'll get back to you after I do :)

I am often bemused at the love The Apartment gets in the blogosphere, and also the oscar for best picture.

Granted It has charming characters and moments and dialogue, but the story was way too formulaic for me to call it greatness.I guessed the ending after 30 min. Maybe a rewatch is in order to try and figure out what I missed.

Cinema being a subjective medium, I guess the only logical response I can give here is, to each his own. :) And well, to say that not being able to guess how a movie ends is an important facet for a good movie, is equivalent of equating the greatness of a film by the number of plot twists & the surprise quotient of the climax. Plot is just one of the many factors defining a film.