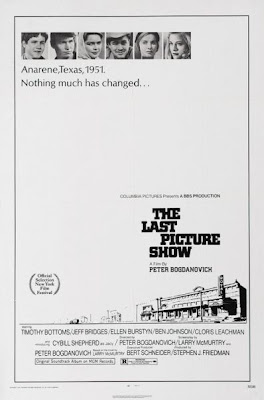 Though 70’s American cinema has come to be broadly identified by its anti- establishmentarian spirit, Peter Bogdanovich’s The Last Picture Show was anything but rebellious. Rather, it was a bittersweet ‘slice of life’ coming-of-age film filled with nostalgia about a time, so to speak, that has been lost in space. Set in a desolate fictional Texan town fast losing its sense of identity with each passing year, the movie has been chronicled through the eyes of Sonny (Timothy Bottoms), a high-school senior belonging to the lower-middle class section of the society – the kind the town is mostly filled with. It provides loving snippets of the lives of its unspectacular yet “real” characters – Duanne (Jeff Bridges), Sonny’s closest friend and his football team-mate, who’s poor like him but in love with the pretty but shallow Jacy (Cybill Shephard), the daughter of rich parents who Sonny starts dating after her breakup with Duanne, which inevitably leads to trouble between the two friends; Jacy’s mother is the beautiful Lois (Ellen Burstyn) who was once (and perhaps still is) the love of life of Sam (Ben Johnson), the owner of the local pool hall and the person Sonny becomes very close to before his untimely death; Sam’s son is a dim-witted young boy who Sonny takes care of; Sonny meanwhile stumbles into a surreptitious affair with the much older Ruth (Cloris Leachman), the lonely wife of his coach. The film boasts of rich character study wonderfully captured through naturalistic performances by the ensemble cast, and the bleak B/W photography superbly accentuated its strongly palpable melancholia and the deeply elegiac tone.

"The film boasts of rich character study wonderfully captured through naturalistic performances by the ensemble cast, and the bleak B/W photography superbly accentuated its strongly palpable melancholia and the deeply elegiac tone."

Your entire capsule is terrific, but the last sense frames this masterpiece perfectly.

Thanks a lot Sam for your appreciation as well as for sharing your deep love and enthusiasm for this movie. Yes, it certainly remains a landmark American cinema and one of the most significant works of the 70's. Your love for the film does exceed mine - maybe because of the cultural factor & the zeitgeist effect, but I sure could appreciate the inherent beauty and lyricism of this bittersweet movie.

The black and white as an aesthetic decision really does evoke nostalgia, I agree, maybe if I was from that era I would affect me on a deeper level.

The Last Picture Show often gets mentioned as Bogdanovich's masterpiece, I have to say it was a bit slow for me, I’m probably not the first person to say that. I actually found Bogdanovich's other b/w 70s film Paper Moon to be equally as good, if not better, have you seen it yet?

I kind of think of The Last Picture Show in the same breath as George Lucas’ acclaimed homage to nostalgia; American Graffiti (1973), also worth checking out, if you love 70s filmmaking ( :

Unfortunately I haven't seen Bogdanovich's Paper Moon, but I sure am interested in rectifying that as I've read lots of good things about it. As for American Graffiti, I've seen it. I liked it, though I wouldn't say I'm crazy about it. Maybe its a cultural thing - the movie would probably appeal more to an American than a non-American.