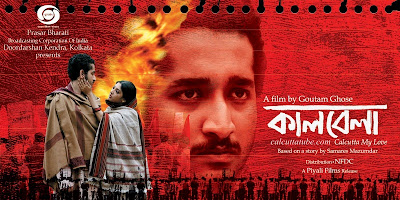 Samaresh Majumdar’s novel Kaalbela (The Odd Hours), which was a fascinating time-capsule of the turbulent 1960's and 70’s Calcutta, remains both an exceedingly popular Bengali novel and a terrific work of art. Compressing a layered and dense book like that into a movie would have been a tough task for anyone. Never to shy away from challenge, Goutam Ghose did take up this arduous task; the end result, one must agree, is reasonably competent and satisfying. Parambrata Chatterjee, in a role any actor would give a limb or two for, plays the principal protagonist Animesh Mitra, an idealistic young guy from North Bengal who has come down to Calcutta to study Bengali literature. Unbeknownst to him, he lands right in the middle of a political hotbed. Over the next few years, he slowly gets indoctrinated into the ultra-Leftist ideologies, and becomes part of the student-led urban guerrilla movement by the name of Naxalism. He also finds love in the form of Madhabilata (very well played by Paoli Dam), a fiercely independent fellow college student, and it is her love that will keep him alive when his grand visions of an egalitarian, classless society get shattered into a thousand pieces. The film did seem a tad disarticulated at times (in need of better editing and bigger budget perhaps) and certainly not as emotionally resonating or gut-wrenching as the book, but I found this well-enacted film a laudatory effort on Ghose’s part nonetheless.

Hey Dude how's it going? I've been trying to watch this for months but can't find a DVD version anywhere. Nice write up though - an epic on the Naxalite movement; the whole ideology and movement really fascinates me. Is it still powerful as an ideology in India today? What about the Bengali youth today - how important is Naxalism for them?

Thanks for stopping by, Omar. Long time no see!

Yeah, I too couldn't get its dvd the last time I'd checked at stores. But the good thing is, a reasonably good copy of the movie is available on Youtube.

As you might know, when the Naxal movement had started, some of the most brilliant students of Calcutta were at its forefront. For them it was a deeply ideological movement. However, that's no more the case now. The movement has shifted base from the cities to the villages.

Yes, bits of it exists in Bengal, though that's far less as compared to states like Chhatisgarh, Andhra Pradesh, etc. And, suffice it to say, those part of the Naxal movement today aren't really conversant with the ideologies of Che, Lenic & Mao. For them "Naxalism' is incidental at best.

Thanks for the contextual info - seems as though you have a real grip on the politics of Naxalism and also it is brilliant to see Indian cinema continuing to engage with Naxalite ideology. Have found it on Youtube like you said - will give it a watch.