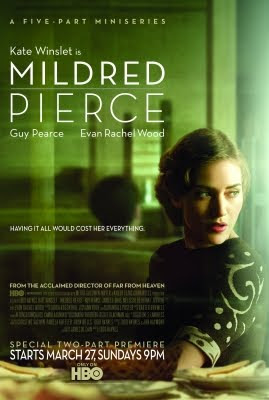 James M. Cain’s classic Depression-Era tale was turned into a film noir by Michael Curtiz in 1945. Todd Haynes decided to readapt Mildred Pierce, and turned it into a 5-part HBO miniseries. In this current rendition of the book, the luscious Kate Winslet has played the role of the titular character, made famous by Joan Crawford in the Curtiz version. She is an independent-minded lady, she throws out her philandering, albeit good-natured husband, and takes the job of a waitress to support her daughters. The movie goes on to follow her eventful life over the next few years, as she loses her younger daughter, gets into a tumultuous relationship with a dapper upper-class fellow (Guy Pierce), becomes a successful entrepreneur by opening her own chain of restaurants only to eventually lose them, so on and so forth. However, at the heart of the movie lies the complex relationship she shares with her pretentious elder daughter Veda who grows into an exceptionally gorgeous young girl (Evan Rachel Wood) but one of the vilest characters one could think of. The more Mildred tries to bestow her love on her, the more she is hurt by the monstrous prima donna. The film boasts of an exceptionally well-rounded turn by Winslet and superb art direction recreating those times. Unfortunately, it seems a tad hollow in its soul, and filled with a lot of implausible character dynamics. Why Veda behaves the way she behaves throughout the storyline in fact remains its most disappointing mystery.

Good review, I like Winslet, I'm surprised she wanted to do tv-work being such a huge star. I remember quite liking the original Mildred Pierce movie, do you know why they wanted to remake in a longer version?
I'm surprised it doesn't do much with the question of the mother-daugther dilemma with an extended running time.

I talked a bit about a similar mother-daugther sitation in my review of Mike Leigh's Secrets and lies, how a child can get away with horrible behaviour, yet the mother is forced to keep loving her. Its a tricky situation with no easy answers.
The novel "What I loved" by Hustvedt I think actually attempted to delve into this question, one of my top 10 favourite books ( :

Thanks. Well, given the kind of actress she is and the kind of diverse roles she accepts, I'm sure she took this offer because it was a challenging role. The fact that it was directed by Todd Haynes too might have played a part, and not to mention it has been produced by HBO.

Yes, being such an elaborate version of an otherwise concise novel, the film did appear overlong at times. However, as far as where it stands vis-a-vis the book or the Joan Crawford starrer I wouldn't know. I've read a few of James M. Cain's works, including The Postman Always Rings Twice & Double Indemnity, I haven't read this one. As for the book you recommended, I'll surely look that up.

I have not yet seen this mini-series though I regard Haynes's FAR FROM HEAVEN as the greatest film of the 2000's and have always been a fan of the 1945 classic with Joan Crawford in her Oscar winning role. Great to have an excellent assessment here Shubhajit, and I am looking forward to the eventual DVD.

Thanks Sam. Yes, I do know about your admiration towards Far from Heaven since I'd gone through your list of best movies of the 2000's. I was motivated to watch this mini-series based on the acclaim that precedes Haynes & of course Kate Winslet's presence. The fact that it is an adaptation of Cain's work was the added incentive.

I like your post. I really like Winslet,since I saw her in Titanic. She is a very good actress that wasn`t lucky to receive Oscar roles.

This might come down to people seeing it differently, but I think both the film and mini-series both explain why the relationship between Mildred and her daughter is the way it is: Mildred through her actions and words too is teaching her daughter to be the way she is, even if it isn't what Mildred supposedly wants her to be. For all their differences: I was amazed at how the film and mini-series were similar.

Thanks for you comment. And thanks a lot for liking my blog. Do keep visiting.