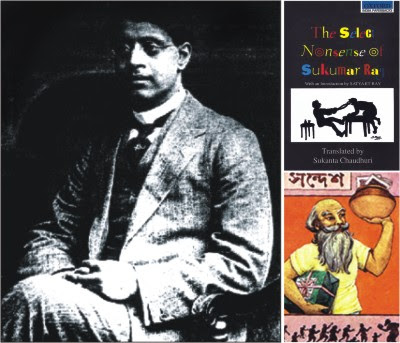 Sukumar Ray was a remarkable personality in the history of Bengali literature. Son of Upendrakishore Raychaudhury (a close friend of Rabindranath Tagore and a man with multifarious talents and achievements), he was an incredibly gifted man. One of the great humourists of the world, he remains the father of ‘literary nonsense’ in India and finds place in world-literature alongside the likes of Lewis Carroll and Edward Lear. His poems, stories and plays, which are filled to the brim with wit, absurdist and satirical humour, wordplays and ironies, and adorned with his wonderful illustrations, remain immensely popular among Bengalis to this day, though largely unknown outside Bengal. Interestingly, his creative bent aside, he graduated in both Physics and Chemistry (from Presidency College), studied printing technology from England, was a pioneer in photography and lithography, regularly dabbled in essays on science, ran the magazine Sandesh started by his father, participated in reformist activities, founded the Nonsense Club, among others! Made by his son Satyajit Ray in order to commemorate his birth centenary, this crisp 30-minute documentary provides a fascinating portrayal of the man, his life (albeit a woefully short one as he died at the young age of 36), his priceless creations and his enduring legacy. Brilliantly narrated by Soumitra Chatterjee, it features performances by some of the doyens of Bengali cinema (in the dramatized sections of his life), viz. Chatterjee, Utpal Dutt and Santosh Dutta. The documentary is funny, lyrical, informative and mournful in equal measures, making this heart-rending (and curiously nostalgic) account a loving tribute to the extraordinary genius of Sukumar Ray.

Must be a great documentary, befitting to a person who had such a mighty impact in the literary culture of the Bengali language. Sukumar Ray's capability lies in captivating the imagination of children and adults alike. His poems would mean nothing to a logical reader yet has unimaginable fan following!!! Abol Tabol is a masterpeice today!!! Characters like Ramgorurer Chhana, Hunkumukho Hyangla, Kumropotash (lolz) are part of everyday vocabulary. The question remains "Nada beltolay jay kobaar..??? :-D :-D"

Well, if I'm to sum-up my response to your comment in one word, it would have to be, "Touche!!!" Absolutely, Sukumar Ray's creations remain an indelible part of the Bengali ethos, and his genius continues to amaze us even so many years after his sad demise at the hands of Kalazhar. Abol Tabol & Haw-Jaw-Baw-Raw-Law were masterpieces of the highest order. What a life he lived - he had so much humour even when he was in deathbed and knew his days were numbered!!!

One has to read haw-jo-b-ro-lo just once, to understand his greatness. I think I have lost my copy of the film, so would appreciate if you could point me to the right sources. :)

Indeed. That's the kind of book that you'd never forget in your life even if you've read it just once. The entire documentary is readily available on Youtube.

As you might well expect, Shubhajit, I have practically no familiarity with this obviously important literary persona, but don't for a second doubt your own reverence, nor your high esteem for this documentary. I was particularly intrigued with the comparison with Edward Lear and Lewis Carroll, but this is a passionate capsule assessment all-around.

Thanks a lot Sam. Yes, I do consider him in very high esteem. Its sad that not many non-Bengalis get to appreciate his genius because of the language barrier - more so because translation of his works is difficult, though I presume people have attempted in translating them. And, in case you missed, he was Satyajit Ray's father. And by the way, I hope that "one day" comes soon :)

I do know he was Ray's father Shubhajit, but somehow inexplicable forgot to mention it in my response here. Ha! But yes, I do need to get to this soon!