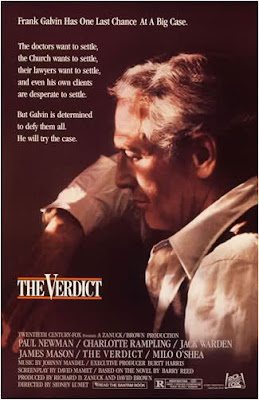 Sidney Lumet, right from his debut film 12 Angry Men to his swansong Before the Devil Knows You’re Dead, has made quite a few remarkable, no-nonsense movies on the flip side of the “American Dream” over the course of his long career. Lumet’s The Verdict remains a powerful courtroom drama as also an exceptional character study of an ageing, has-been man who gets a one-off opportunity to redeem himself and reclaim his dignity in the eyes of the world, and more importantly, in his own eyes. Paul Newman, in what might rank as one of his finest performances, played the role of the protagonist Frank Galvin. Galvin, an alcoholic Boston lawyer who’s hit the rock bottom both personally and professionally, goes against a mighty law firm representing a Catholic hospital in order to defend against various odds the cause of a woman who’s gone into coma upon wrong administration of anesthesia. On the surface the film might appear to be a classic underdog story, but thanks in large parts to the great script and Newman’s tour-de-force performance, it developed into something much more than that. Newman received excellent support in the form of Mickey Morissey as Galvin’s loyal friend, Charlotte Rampling as his deceitful lover, and James Mason as his high-profile rival. The best aspect of the movie remains the time and effort expended by Lumet in developing the characters and character dynamics, and in its exemplary pacing leading us to a quietly profound albeit understated climax.

Nice review of a film that I admit I have not seen yet. It sounds like another great Lumet film. I really like most of his stuff so need to see this one.

Thanks Jon. Yes, it indeed is another great work by Lumet, and I'm sure you'll like it. So do go for it.

On balance I'd have to say I like teh film a bit less Shubhajit. I'd say it's mid-range Lumet. Still, my regard for him is considerable, when you factor in 12 ANGRY MEN and THE PAWNBROKER, both masterpieces of teh cinema. I can't really question your examination of the components here in this masterful capsule review, it's just that the end result for me is more middling.

Thanks Sam for sharing your views on the film. Well, whenever one discusses on Lumet's 2 or 3 best works, The Verdict usually doesn't find a place in it. Yet, despite the middle-of-the-list status that this film has, I found it extremely powerful & quite affecting as well. For me it remains an excellent example of a great performance backed by a superb script.