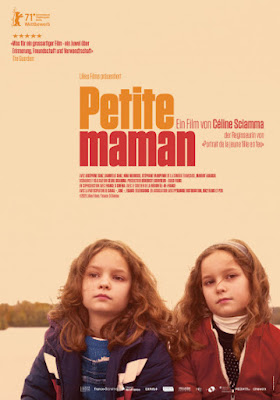 Céline Sciamma’s filmography – Water Lilies, Tomboy, Girlhood, Portrait of a Lady on Fire – had so far been filled with complex, fierce and magnificent inquiries into gender, feminist and queer identities within heteronormative, patriarchal and conformist social structures. Petite Maman, therefore, was a breath-taking departure in its scope and themes, in that this was a deeply restrained, quietly haunting, achingly intimate and disarmingly low-key portrayal of childhood innocence, grief, loss, memories, and an engrossing but fleeting relationship that brews between a child and her mom when she too was a kid. On the latter aspect – viz. meeting the younger version of one’s parent – it has drawn some comparisons with the hilarious sci-fi Back to the Future; however, the Sciamma and the Zemeckis had as much in common as French condiments and American ketchup do, which is to say none but for some apparent resemblances. It was, therefore, an absorbing ghost story and evocation of a free-spirited child as the mother of a disconsolate woman, which Sciamma captured through interplay between a potpourri of emotions – joy, fears, pain, melancholy and reconciling to one’s life – despite remarkable narrative brevity and tonal simplicity. 8-year old Nelly (Joséphine Sanz), who’s just lost her loving grandma, has come to her mom’s childhood lodge to pack all the old stuffs; but when her grief-stricken mom (Nina Meurisse) absconds, she meets – and beautifully bonds over pancakes, games and shared loneliness – with Marion (Gabrielle Sanz, Joséphine’s real-life twin sister), a cheerful girl her age bearing a striking physical likeness to her and with uncanny commonalities to her mom’s childhood days. It’s especially extraordinary that Sciamma found and brought about such lovely and endearing performances from the twin sisters.