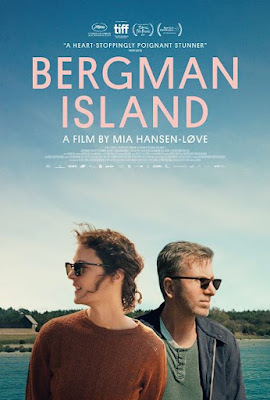 Mia Hansen-Løve considerably expanded on her form and themes, while still retaining her delightfully distinctive tones and palettes, in Bergman Island. Made completely outside France and with an international cast – a trend she’d begun with Maya – it saw her handling an ambitious cinematic premise with its film-within-film narrative, interweaving of real and fiction, self-reflexive look at the creative process of a filmmaking couple – the older, renowned husband, and younger wife with a very different voice trying to find her footing, mirrored Hansen-Løve’s former relationship with Olivier Assayas, thus adding autofiction to the proceedings – and, above all, surprisingly nuanced and beguiling peek into the towering giant of the seventh art, Ingmar Bergman. That she expressed her admiration without placing him on a pedestal – including, not shying away from references to some problematic sides of his personal life – made it a refreshing watch despite the many pitfalls it had to smartly sidestep. That it was also tender, intimate and emotionally rich, firmly placed it within her oeuvre. In its primary strand, the said couple – Bergman devotee Tony (Tim Roth), and Chris (Vicky Krieps), an enthusiast but with conflicting feelings – move in to Fårö – the beautiful island where Bergman lived and made many of his gothic, gut-wrenching masterpieces – to both re-explore the Swedish maestro and work on their own screenplays. The parallel strand, which dramatized Chris’ deceptively personal screenplay, covered the rekindling of old passions when a young American filmmaker (Mia Wasikowska) finds herself in company of her former lover (Anders Danielsen Lie) while in Fårö to attend a wedding. The film – buoyed by terrific performances and lively soundtrack – was filled with joy, fragility, melancholy and unspoken disaffection both personal and professional.