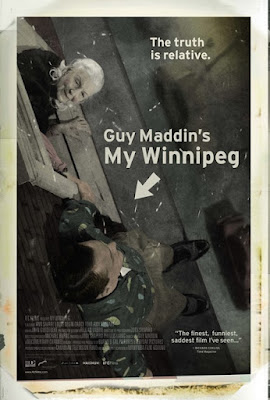 In Guy Maddin’s hallucinatory, surrealistic and experimental faux-documentary, Winnipeg – the Canadian India filmmaker’s hometown – was, by turns, oddball, nightmarish, somnambulist, packed with Freudian memories and shaped by conflicting contradictions. It’s the sleepwalking capital of the world where it’s forbidden to destroy old signage, a frozen lake with the heads of six dead horses that died while trying to swim through it became a picnic spot, two taxi companies divided their territories wherein one plied across the city’s main streets and the other its forbidden back-alleys and its closet is filled with grotesque skeletons. The bourgeoisie and the working class, conservatives and progressives, prudish and decadent, wealthy and impoverished, and those who want to conserve this bitingly cold city’s cultural legacy and those who don’t wink twice before razing them down co-exist in such a deeply distrustful alliance that the fragile faultlines often erupt into hostile confrontations. As one might therefore expect, he’s had a deeply ambivalent relationship with Winnipeg – a place he wants to escape from but can’t (or won’t), as portrayed through a groggy man traveling interminably in a train full of half-asleep passengers – and he captured that through expressionistic B/W photography, a jaded and staccato voiceover straight out of classic noir, and free intermix of archival footage and personal impressions that blurred the lines of reality. These complexities were amplified by his brooding and discomfiting psychosexual memories of his domineering mother, and which he evoked through melodramatic recreations featuring a cold, sardonic Ann Savage – best known for her role in Detour – cast as “Mother”, and other actors as his siblings, in vignettes shot at his childhood house and which he now had to rent for this enactment.