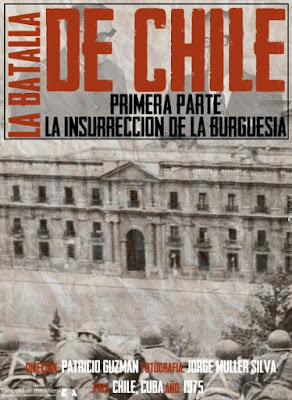 Patricio Guzmán’s monumental documentary trilogy The Battle of Chile – moulded with electrifying vitality, revolutionary fervor and political conscience – represents the pinnacle of street filmmaking, advocacy journalism and fearless dissidence. However, its thrilling prescience is what set it apart because, instead of the usual practice of looking back, Guzmán recorded Chilean history in action – the romantic apotheosis of non-violent socialist revolution heralded by Allende’s Marxist presidency, brief realization of working-class dreams, reactionary subversions, people’s resistance and the devastating nadir upon the US-backed coup that put Pinochet’s fascist military junta in power – by heroically shooting for over a year from mid-1972 till the fateful day on 11th September 1973, with a team of fellow left-wing activists and using film stock gifted by Chris Marker. The brilliant, sardonically titled first chapter, The Insurrection of the Bourgeoisie, covered the conservative, capitalist class’ putrid opposition to Allende’s progressive Popular Unity government and ended with an Argentinian photojournalist’s murder captured by his own camera during a short-lived putsch. The masterful middle chapter, Coup D'état, chronicled the chilling opposition – orchestrated by right-wing politicians, industrialists, military bosses, paramilitary hoodlums and the CIA – that, despite massive popular surges, ended with La Moneda’s bombing and Allende’s murder. And, in the elegiac coda, The Power of the People, the focus shifted to the proletariat workers, farmers, students and activists who believed in Allende even if they didn’t always agree with him, and made valiant efforts to keep the collective dream alive. Guzmán smuggled the unedited reels to Europe and somehow escaped himself too, but cameraman Jorge Müller – responsible for the film’s grainy, exhilarating vérité imagery – and his girlfriend Carmen Bueno unfortunately couldn’t avert the macabre fate that befell upon countless leftists.