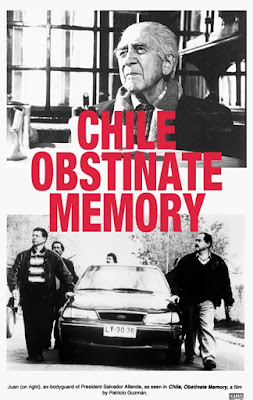 Guzmán marked his profoundly complex homecoming, after 23 years in exile, with Chile, Obstinate Memory. Made as a loosely connected sequel to his seminal documentary Battle of Chile – which, unsurprisingly, was banned by Pinochet’s right-wing dictatorship, but surprisingly continued to remain unscreened even after that – this was a haunting, disquieting, disarmingly powerful, eloquently observed, understated and unforgettable mix of the personal and the political; from that perspective, it presaged his recent essay film The Cordillera of Dreams, the stunning final chapter in his devastating Chile Trilogy which also comprised of Nostalgia for the Light and The Pearl Button. Memory – individual and collective – and the associated acts of forgetting and remembering were its pivotal themes. Akin to how he’d smuggled his landmark docu out of Chile – where he’d chronicled the brief but rousing Popular Unity period under Allende, and the violent coup d'état by fascist forces – he secretly brought it back for privately screening it to people belonging to two contrasting generations. He got in touch with those from his own generation – old friends, lost acquaintances, relatives, repressed intellectuals, family members of former political activists, those who experienced the coup and Allende’s final moments first-hand, and those who featured in his famous earlier work and thereafter helped him in getting it out – who’d witnessed the destruction of the dream and the traumatic aftermath in the form of extrajudicial deaths, mass detentions – Guzmán himself faced that in Estadio Nacional – forced disappearances and years of disillusionment. And, alongside that, he also showed it to university students – who’ve lived under censorship and propaganda, and thus unaware of their history – and the outpouring of suppressed emotions that it evokes was deeply revelatory and moving.