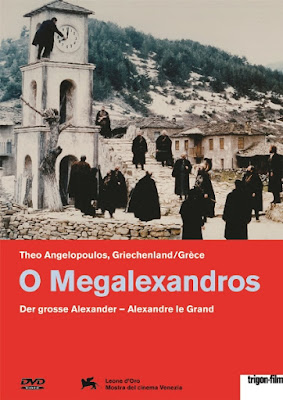 Alexander the Great, with its sprawling tapestry and intricate thematic examinations – beautiful but fragile dream of utopia, transition of a mythic and heroic revolutionary into an authoritarian corrupted by personality cult, contemporary Greek history rife with repressive regimes and foreign interventions – made it, alongwith The Travelling Players and The Hunters, among the most complex, searingly leftist, provocative and densely structured films in Angelopoulos’ storied career. And yet, interestingly, its historical evocations and allusions were relatively more obtuse, elusive and metaphorical. These facets, therefore, made this an interesting point of intersection between his extraordinary ‘Trilogy of History’ (which also comprised of Days of ’36) and equally sublime ‘Trilogy of Silence’ (Voyage to Cythera, The Beekeeper, Landscape in the Mist). It opens with the kidnap of pompous English nobility in Athens by a group of rebel freedom fighters spearheaded by an enigmatic, charismatic, staunchly dissident leader who calls himself Alexander the Great. The ransom demand to the puppet Greek government is simple – amnesty for his gang and write-off of debts of small peasants at the mercy of feudal landlords. They take refuge at a small village where he was revered and which has radically transitioned into socialist governance – using the short-lived Paris Commune as model, under the aegis of an idealist Communist teacher and Italian anarchists – where no one owns any property and everyone is responsible for everyone else. Things, though, take a troublesome turn when Alexander turn into an oppressor, while in turn being increasingly cornered by ruthless government forces bullied by the English. The exquisitely atmospheric narrative was filled with audaciously conceived and choreographed long takes, an infectious theme score, lively folk songs and a profound sense of fatalism.