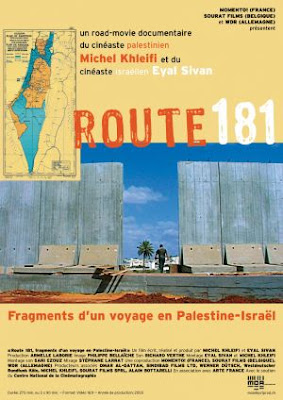 The 1947 UN Resolution 181 recommended partitioning of Palestine into two unequal halves, with 56% allocated to the Jewish minority and 43% to the Arab majority; this so-called “Green Line”, however, was swiftly abrogated upon the 1948 War – thus further skewing the rights and demographic distribution over time – and ensured that it’d remain just on paper. In 2002, two defiantly leftist and politically conscious émigré filmmakers – Eyal Sivan, an Israeli, and Michel Khleifi, a Palestinian – travelled for two months following this non-existent line from south of Gaza to Galilee in the north – collecting stories, anecdotes, opinions, experiences, memories – which they aptly titled Route 181. The resultant work – powerfully traversing across oral political history, road movie and documentary essay – made for a stirring, evocative, piercing, discomfiting work that beautifully succeeded in being both radically dissident and profoundly melancholic in equal measures. That the film – capturing the distressing perpetuation of setter-colonialism and an apartheid state, which’ve only exacerbated over time – was borne out of collaboration between an Israeli and a Palestinian, thus eloquently subverting the political divides on ground, added an ironic touch to its wryly observant and delicately strung proceedings. Over its 4 ½ hour length divided into three segments, the duo interacted with a dizzyingly diverse group of people – old and young, men and women, soldiers and civilians, oppressors and exploited, bigoted and disillusioned, bellicose and weary – in weaving this complex tapestry. In a tour de force sequence, an aged barber, surrounded by equally aged customers, recounts a harrowing account of ethnic cleansing; this sequence, which mirrored a similar one in Lanzmann’s Shoah, inevitably led to vociferous oppositions by those blinded of the Palestinian plight by their nationalist zealotry.