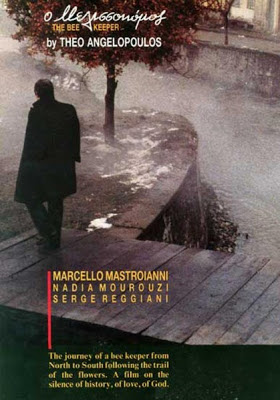 The Beekeeper, the second chapter in Angelopoulos’ ‘Trilogy of Silence’, was thematically and stylistically a more apt companion piece to Eternity and A Day, along with Voyage to Cythera. Like the Bruno Ganz starrer, this was more of an intimate and personal drama than a sprawling or a political one, and had a renowned non-Greek actor as a middle-aged central protagonist who is quietly at odds with the fast-changing world around him. It began with a deeply emotional sequence – Spyros (Marcello Mastroianni), a soft-spoken teacher, internally weeping at his daughter’s marriage. Upon the completion of the event he leaves his wife and his job, and returns to his roots, so to speak – that of life on the roads keeping bees which he had learned from his father. During his journey he meets some of his old friends, and makes acquaintance with a young, carefree and promiscuous hitchhiker (Nadia Mourouzi). He initially avoids her advances because she reminds him of his daughters; yet, ironically for the same reason, he eventually embarks on a passionate tryst with her. Theo wonderfully counterbalanced the allusions of incest, self-guilt, mid-life crisis and futile attempts at personal redemption, with its broader, if subtler, sociopolitical observations on the chasm between Greece’s past and present. Mastroianni gave a masterful performance laden with restraint and near-passivity, while Mourouzi, too, was effective as the girl who briefly joins him in his physical, emotional, and ultimately, personal odyssey. As can be expected, the film comprised of exquisite washed-out photography, elegant camerawork, deeply melancholic tone, and leisurely pacing allowing for probing into the near impregnable psyche of the complex protagonist.

Mastroianni was superlative in this film, which I do prefer to ETERNITY. Angelopoulos is another director who needs to receive full appreciation in the west.

Yes, personally I too would rate this, as well as a number of Theo's other films (The Travelling Players, The Hunters, Landscape in the Mist, Weeping Meadow, Voyage to Cythera), over Eternity, even though the latter remains his most well known work. I'm yet to watch just 3 more films of his - Reconstruction, Alexander & Suspended Step of the Stork.