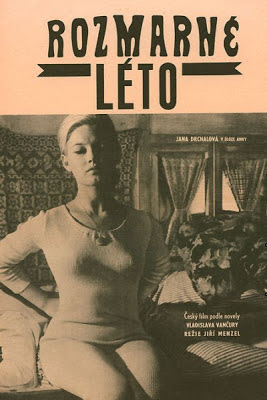 Capricious Summer was a big surprise for me. Unlike the four other films by the Czech master Jiri Menzel that I’ve watched, this wasn’t at all political, thus making it quite anachronistic with the Czech New Wave. And, more interestingly, it was sandwiched between Closely Watched Trains and Larks on a String – two of the most subversive sociopolitical satires I’ve watched. What Menzel presented here was an amusing and laidback comedy on ageing and male friendship. Adapted from a literary source like most his films were, the story was about three amiable middle-aged slackers living idle lives in an idyllic location in the countryside – a garrulous man (Rudolf Hrušínský) married to his frustrated and flirtatious wife, an uptight and puritanical priest (František Řehák), and a soft-spoken Major (Vlastimil Brodský). They spend their days lazing, drinking, fishing, swimming and philosophizing. But, the arrival of a quirky magician-cum-tightrope walker (played by Menzel himself), wake them from their stupors. And then they chance upon the performer’s coy, alluring and incredibly beautiful female assistant, and their lives don’t remain uneventful anymore with their respective hearts and loins jumping to top gear. But then, as can be expected, this detour from their mundane, monotonous lives ends in disappointment for all, thus reminding them, in no uncertain terms, that they aren’t young anymore. The film’s deadpan humour and whimsical tone made this a charming watch, though the rather simple premise and equally simple treatment made this too light to take seriously. The idiosyncratic turns by the three men was commendable, and the fools that they make of themselves sadly funny.

Wow, I just finished watching this the other night and I say "finish watching" because lately I've been trying to squeeze these Eclipse discs (don't know how you watched them but I recently acquired the "Pearls of the Czech New Wave" set) at the end of busy days, when I'm very tired, and therefore I end up splitting them up into several viewings. Which is not ideal, but I own the DVDs now so I'll be able to return to them in better circumstances.

I found the most vivid element here to be the wife, who inspires longing in the viewer as well as the three men - she is irresistibly lovely, but in a frustrating, unattainable way. Not even sure of the actress' name but she captured that quality perfectly!

And one last note: Menzel's character, especially in relation to the boorish protagonists (though more obviously in his corcus antics) reminded me a lot of the Fool in La Strada.

Meant to write "wistful" rather than "pleasing" when discussing the film's ending. Another comparison, too: there was a Bergmanesque air about the film as well - at least the Bergman who delighted in romantic roundelays, particularly involving low-grade show biz folks.

I'm really in love with Czech New Wave, and have managed to watch reasonable number of films from that wonderful movement. Well, yes, I do agree with you that some allegorical subtexts were discernible in the film. But, not only was it slight comparison to most other films of the movement, its political intent, too, was minimal at best. And that's most interesting considering how political the other films belonging to the movement were, including the ones by Menzel himself (this happens to be my 5th movie of his).

Unfortunately I haven't seen La Strada (yet another film that I ought to watch sooner rather than later). However, Bergmansesque is an interesting epithet you've used here, though, in my opinion, I really didn't think in that direction given what the kind of films/themes/tone that the term signifies for me. But yes, if & when I rewatch this, I'd certainly keep an eye in that direction.

Thanks a lot Joel for the wonderful comment. I also apologise for not having been very regular at your site in the recent past. But yes, I do plan to watch your short film soon - and my congratulations to you for that in advance!

The style was not Bergmanesque, but the milieu and to a certain extent the tone were, with the chintzy traveling circus, the fool as a knowing figure, reminding me of Sawdust and Tinsel and the lighter passages of Seventh Seal. With the pompous bourgeois succumbing to the charms of youthful beauty at a summer retreat evoking Smiles of a Summer Night.

This film grows in memory (and in reading about it), a week after watching it I'm drawn to view it again even though at the time it didn't really bowl me over.