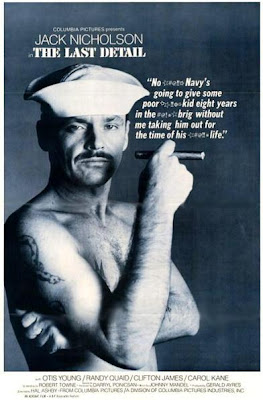 Fresh from his tremendous critical success with Harold and Maude, Hal Ashby’s follow-up film, viz. The Last Detail, too, was aimed against the establishment, albeit in a far more toned down manner. Whereas in the former the barbs were aimed at a wide ranging group, from the stiff lipped upper class to conservative patriarchs, here it was more focused – the regimentation and rigid authorities of the conservative armed forces, and the result was not just a film in perfect sync with the anti-establishmentarian spirit of the era, but also a memorably layered and affecting coming-of-age tale on friendship and freedom. “Badass” Buddusky (Jack Nicholson) and “Mule” Mulhall (Otis Young) are two jaded Navy lifers entrusted with the task of escorting Meadows (Randy Quaid), a young sailor sentenced to 8 years in prison and dishonorable discharge for stealing a paltry 40 dollars, from their Norfolk base to Portsmouth prison. On the way the gregarious Badass decides to give the shy Meadows the grandest time of his life, and make a man out of him – both in literal and figurative senses, which the more restrained Mule reluctantly agrees to, during their travel via New York. The gritty visuals, edgy tone and the profanity-laden script were brilliantly complemented with the film’s softer and more melancholic inner core. Nicholson gave a fabulous performance as the outwardly aggressive but essentially soft-hearted sailor with an inherent dislike for pompous authorities. The other two actors, too, gave fine turns, as the three take a quintessentially American road journey where machismo and bravado co-exist with understated male friendship and coming to terms with one’s insecurities, frustrations, alienation and existential angst.

Yep, I remember this film well, as it released during my impressionable years. Nicholson gave a charismatic turn, and the hard-hitting script was indeed complemented by a softer context. Randy Quaid was most memorable as well.

Its really unfortunately that Nicholson hardly ever gets mentioned for his performance in this film, or for that matter in The King of Mervin Gardens, or even in, Five Easy Pieces - which easily ranks amongst his best works as well as one of the best American films of the 70s. This guy has given so many amazing, even iconic, performances over the years (Chinatown, One Flew over the Cuckoo's Nest, Easy Rider & The Shining are easily the most famous of the lot), that a lot of really good ones tend to get lost in between.