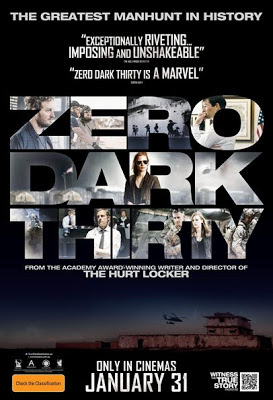 Kathryn Bigelow, who shot to fame with the Iraq War drama The Hurt Locker, has followed it up with another popular topic for the American populace – the decade-long hunt for the most wanted man on earth, Osama Bin Laden. Zero Dark Thirty, which refers to, in military parlance, the time at which “UBL”, as the CIA had named the Taliban kingpin, was shot down by Navy SEALs, film begins with audio footage of the 9/11 attacks. Maya (Jessica Chastain), a young CIA inductee, is thrown right into the job as she becomes witness to Dan (Jason Clarke), her immediate superior, subjecting a detainee to torture at a ‘black site’, in a re-creation of the notorious Abu Ghraib prisons. With the talented and tenacious workaholic working towards capturing Laden, Bigelow went onto to dramatize, in documentary-like realism and detail, the long, tiring and often uneventful investigation that finally led to locating him at a mini fortress at Abbottabad in Pakistan. The curt style employed in driving the narrative was engaging for its relentless focus on the investigation, and the here and now feel on account of the constant sense tenseness; yet, ironically for the same reasons, they also would keep one at an arm’s length as the viewers are hardly ever allowed into the minds of the investigators, particularly that of its obsessed protagonist. Consequently, though Chastain gave a first-rate performance of someone, for whom, succeeding at the mission at hand becomes the sole objective of her life even when interests start flagging elsewhere, and for whom ends, quite clearly, justify the means, her character, which interestingly was a fictitious one, never received a three-dimensional treatment.

Shubhajit....her character is actually as reported....not fictitious, depending on where you look. I found sources that indicate she's a real individual still working for CIA as the Washington Post says. The film has no room for calls back home to mom. It's not that kind of movie and consistently doesn't let us know anyone. But that's no knock. I thought I knew exactly enough about her. It's the best film of 2012.

Well, I guess I could be wrong - I'll do search more extensively about her than I have. Yes, this isn't the kind of film where the protagonist needs to call her mom. But, we haven't really been presented with a fully developed character, in my opinion - most importantly the emotional toll (except for the frustrations), her politics, her ideological beliefs vis-a-vis her work, etc.

Anyway, that said, this was indeed a rivetting watch, even though it wouldn't rank as the best film of the year (among the ones that I've watched). I would easily place Amour, Holy Motors, Someone Like Love, Beyond the Hills & Killing Them Softly over this. This, of course, might get revised once I've managed to watch some of the other acclaimed films of the year, like Pieta, etc.

Interesting. I have not seen Amour yet and have high hopes for that one. I was really underwhelmed by Killing them Softly....and Holy Motors was good but not great to me. But to each his own. Regarding Maya's existential existence....living for her work to a degree.....I kind of like that type of portrayal. Reminds me of Alain Delon in Le Samourai, Clint Eastwood as the "man with no name"....or even more recently like Ryan Gosling in Drive.

Excellent review and comment section. Certainly there is no question this is one of the greatest films of 2012. Chastain is extraordinary and Bigelow smartly hangs on the line with the controversial torture sequences.

Thanks Sam. Yes, I'm well aware of your and Jon's deep appriciation for this film. I'm of course not denying that this is a very good film; just that, I wouldn't consider it as the best of the year.