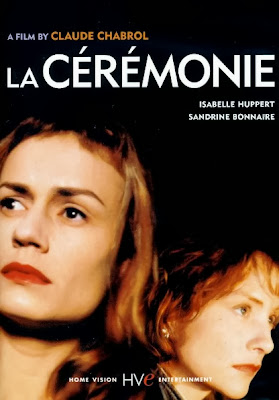 The brilliant late-Chabrol, La Ceremonie, a slow-burning psychological thriller with a continually rising tempo and an explosive finale, was a powerful portrayal of class struggle, reinforcing the seemingly irrevocable wedge between diametrically opposite social classes. Adapted from Ruth Rendell’s A Judgement in Stone, the influences of Capote’s In Cold Blood was unmistakable. When the wealthy and aristocratic Lelièvre family – patriarchal music-loving Georges (Jean-Pierre Cassel), his stunningly beautiful second-wife (Jacqueline Bisset), and their kids from previous marriages – residing in an isolated mansion, hires the taciturn housemaid Sophie (Sandrine Bonnaire), a ticking time-bomb is set in motion. Though good in her job, her behavior is icy, aloof and mysterious from the outset, and to further complicate matters, she is secretive of her inability to read and write. Her subliminal pathological tendencies are stroked when she befriends Jeanne (Isabelle Huppert), an eccentric, impulsive and spiteful post-office employee, who is resentful of the upper class and loves spewing false venom about the Lelièvre family members. Chabrol brilliantly paced the narrative, punctuating it with excellent plot and character developments, which made the violent showdown nerve-racking despite not being wholly unexpected, and comprised of marvelous turns by Bonnaire and Huppert, particularly in portrayal of their increasing emotional connect, and fine supporting turns. Though class-difference formed its principal motif, this tense, intriguing, deliciously misanthropic and quietly tragic film also clinically examined issues of isolation, alienation and the random nature of crime and violence, where the distinction between good and evil is merely incidental and circumstantial.

"....was a powerful portrayal of class struggle, reinforcing the seemingly irrevocable wedge between diametrically opposite social classes...."

Dead on Shubhajit! For many this is Chabrol's masterpiece or at least the Chabrol film most have seen. Great review. Kaurismaki's THE MATCH FACTORY GIRL seems to have been influenced by this film.

Thanks. Now that you mention, The Match Factory Girl does have a few resemblances with this film, from a thematic standpoint & how the girl really goes off the hook in the chilling climax. This was of course more "serious" in its tone. Surprising that Chabrol could churn out such audacious works even at the last leg of his career.