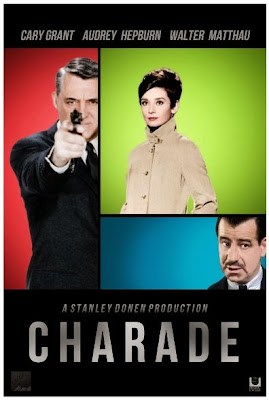 Charade, made in the Hitchcockian vein by Stanley Donen, was a delightfully taut, funny and charming romantic thriller and an enjoyable ride, even if the end product might be too slight and plot-centric to be taken too seriously. The plot made full-use of such classic Hitch-elements as mistaken identiy and being emotional coaxed to be the proverbial sacrificial lamb for the country’s sake, with a few MacGuffins and a plethora of twists, albeit quite a few contrived ones that stretched logic to its very edge, thrown along the way. Regina (Audrey Hepburn), a beautiful, lovable and naïve lady, while on a holiday to France, is contemplating divorce when, ironically, her cocooned life comes crashing down upon being informed that her husband has died under mysterious circumstances and that he wasn’t the person she knew him to be. And, to make matters worse, she finds herself being chased by three criminals (James Coburn, Goerge Kennedy and Ned Glass) who believe she has a huge stash of money hidden somewhere. Meanwhile, a mysterious man in a dapper suit and with a ready wit (Cary Grant) becomes her ally, even though his identity keeps shifting at regular intervals. Despite his dubious nature, she finds herself falling for him, and the sparkling chemistry between Grant, as the warm, gentlemanly but unreliable guy, and Hepburn, as the incredibly sweet, seemingly gullible but essentially smart lady, made their topsy-turvy journey all the more fun and engaging. The script, filled to brim with delectable humour and hilarious wisecracks, changed its course at whim, and at times once too may. The fine, oft-imitated theme music, and smooth performances by all, too, were noteworthy.

I thought it kind of dragged along towards the later half.

Yes indeed, a charming and spirited romp of a film that I recently saw at the Film Forum. The two leads are fabulous, but you've covered almost all the bases here Shubhajit. I'd only venture to add the landmark score by Henry Mancini, which is even great to listen to as a stand alone.

This was a really enjoyable watch, even if it seemed tad ludicrous at times. But then, I guess, it was deliberately intended to be so in order to possibly indulge in some spoofing of the kind of films such as this. The score was indeed very good - thanks for pointing that out Sam.