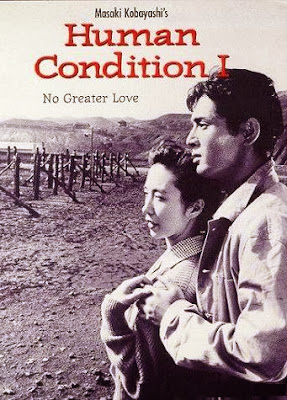 Clocking at nearly 10 hours, Masaki Kobayashi’s ‘Human Condition trilogy’, was a massive and ambitious venture based during the concluding stages of WWII. No Greater Love, the 3 ½ hour long first installment, set the socialist-humanist-realist tone and theme for the epic magnum opus. Kaji (Tatsuya Nakadai), an idealistic and headstrong pacifist, who loathes wars and exploitation of the weak by the ruling class and establishment, and was possibly an alter-ego for the director himself, reluctantly accepts the challenging task of being a labour in-charge at a large mine in Japan-occupied Manchuria, in order to avoid conscription to the army. To his horror and dismay, he notices, upon his relocation with his naïve sweetheart (Michiyo Aratama), incredible oppression faced by the impoverished Chinese folks and POWs who are regularly beaten and made to toil like slaves in harsh conditions on half-empty stomachs by the supervisors in order to meet the company’s insane production demands. As he tries incorporating humanism and doing away with brutalities, he faces opposition from all those around him; and, to complicate matters further for him, the forced labourers keep making escape attempts. The delicacy of his position finally crumbles when he opposes the sham execution of POWs, leading to his physical torture and being drafted to military service. The brilliant B/W photography and rousing score provided perfect accompaniments to Nakadai’s impassioned turn – his burdening conscience and increasing spiritual desolation. Though the film at times veered towards melodrama and over-the-top moments, it provided a compelling examination of hardline nationalism, war-time tragedies and class struggle. A trainload of half-dead POWs dropping dead like flies formed its most haunting image.

Glad you liked No Greater Love, will you review all three films? Tatsuya Nakadai is one of the great performances from that era. I remember in No Greater Love the crowd desperate for food was a very powerful scene.The execution sequence also.
I love how the trilogy is visually cinematic in its storytelling.
The politics went a bit over my head in some moments, but in terms of the main themes, I would call it an anti-military story, with the dehumanization of laborers.

Yes, I'll be posting about the other 2 films in the trilogy as well, as I've managed to watch them in the meantime. In fact, though I really liked No Greater Love, having watched the entire trilogy I feel that the remaining 2 films (Road to Eternity & A Soldier's Prayer) were even greater cinematic achievements.

Yes its themes are universal and its an irrefutable masterpiece of the cinema. Beautifully writing here Shubhajit.

Thanks Sam. And to think, this was actually, in relative terms of course, the least of the 3 films in the trilogy!