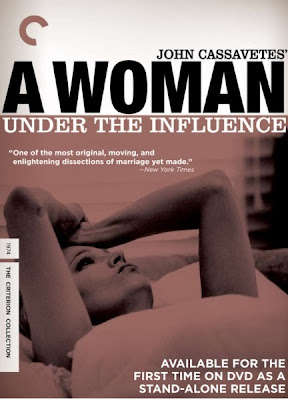 A Woman under the Influence, Cassavetes’ landmark Indie film, and arguably his greatest masterpiece, was a harrowing and incredibly probing portrayal of the psychological meltdown of a lady and its distressing fallouts on her blue-collar suburban family. It was, more than anything, a powerful and detailed examination of the various shades of love in the context of a conservative working-class family, finding beauty in familial mundaneness and disturbance, and questioning the social definition of sanity. Nick (Peter Falk), a construction worker, and his wife Mabel (Gena Rowlands), love each other and their three kids. However, in a terrific scene where Nick, on a whim, invites his friends over for breakfast, it becomes obvious that things aren’t hunky-dory with Mabel’s mind, and as she veers towards breakdown, a vicious spiral is set in motion. The narrative was split across her commitment to a mental clinic, with the latter half being a memorably staged family dinner upon her return where Nick, as opposed to trying to control her ticks and neuroses, keeps asking her to be herself seeing her eerily placid veneer. Before long it became clear that the treatment had only taught her be artificially normal – and when that spectacularly broke down, what followed was messy, chaotic and a profound reaffirmation of their love. Rowlands gave a startling turn as the impulsive, fragile and emotionally unstable wife poignantly searching for confirmation about her normalcy, while Salks was equally brilliant as the increasingly edgy and volatile husband. The grainy hand-held photography, disorienting close-ups, single-takes, including one during the quietly effective closing-credits, and the beautifully rambling script, took us right in the middle of the proceedings.

Really glad you liked this one alot. It's a devastating work and rather unforgettable with brilliant performances. It's also tough to watch in a way, but that's kind of the way Cassavetes works. Faces is even more difficult but also very rewarding. Very nice write-up.

This is such a stunning film because Cassavetes gives the actors such levity to dig into the characters. Despite the theatrics, they feel like real people, and that makes it so much harder to watch the conflict. It's been a while since I've seen it, but this movie has really stuck with me.

@Jon: Yeah, this was long overdue. I've watched Faces - it was far more indulgent than this, but was a fine film nonetheless. Husbands is the only other Cassavetes that I've seen so far.

@Dan: The stark, discomfiting realism was such a memorable aspect of the film. It felt as if I was place right into the room with the couple. The naturalistic script was a boon in this regard, methinks.

Yes, devastating and overpowering and my own favorite Casevettes film. Rowlands of course was electrifying here. Great review!

Thanks a lot Sam. I'm glad that I finally managed to get around to it - better late than never, as they say!